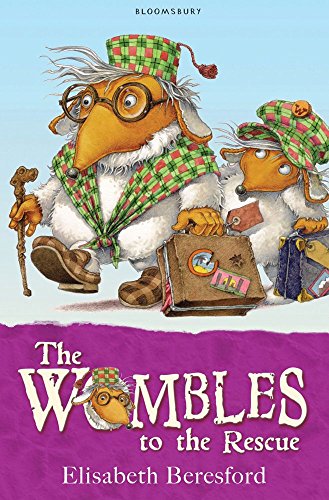 The Wombles to the Rescue
by Elisabeth Beresford

Used Price
$15.49
inc. GST
Free Shipping in Australia
Classic and much loved characters brought back into print with a fresh new cover look and inside illustrations to celebrate over 40 years of the Wombles
Reviews:
Trustpilot
Very Good

The Wombles to the Rescue Summary

The Wombles to the Rescue by Elisabeth Beresford

The Wombles have just gratefully returned to their burrow on Wimbledon Common. They had had to leave because heavy lorries thundering up and down the nearby road threatened to make the roof of the burrow cave in. However, now that the Wombles are safely back, there is another problem they have to contend with. It seems that the humans have realised they have an energy crisis and are throwing much less away. The Wombles' supplies begin to run low. What can the Wombles do? It is time for EMERGENCY SPECIAL PROJECTS - with DIY king Tobermory in charge!

Customer Reviews - The Wombles to the Rescue

The Wombles to the Rescue Reviews

`A lively, entertaining and humorous book, stuffed with ingenious ideas and endearing characters' * The Times *
`The six original titles by Elizabeth Beresford are back in print, with an environmental message that has never been more relevant. Perfect for 8-to 10-year-olds' * Telegraph magazine *
`Today's children will be as charmed as their parents by Great Uncle Bulgaria, Orinoco, Bungo and Tobermory and their quest to recycle rubbish and put it to good use' * www.express.co.uk *

GOR004075639
The Wombles to the Rescue by Elisabeth Beresford
Elisabeth Beresford
Used - Very Good
Paperback
Bloomsbury Publishing PLC
2011-03-07
192
1408808382
9781408808382
N/A
Book picture is for illustrative purposes only, actual binding, cover or edition may vary.
This is a used book - there is no escaping the fact it has been read by someone else and it will show signs of wear and previous use. Overall we expect it to be in very good condition, but if you are not entirely satisfied please get in touch with us.