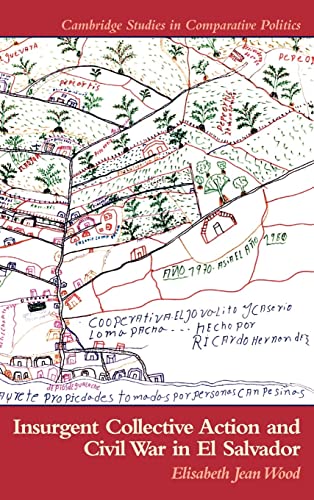 Out of Stock
$108.99
inc. GST
Widespread support among rural people for the leftist insurgency during the civil war in El Salvador challenges conventional interpretations of collective action. Wood's explanation is based on oral histories gathered from peasants and interviews with military commanders of both sides.
Good
Only 0 left

Widespread support among rural people for the leftist insurgency during the civil war in El Salvador challenges conventional interpretations of collective action. Those who supplied tortillas, information, and other aid to guerillas took mortal risks and yet stood to gain no more than those who did not. Wood's rich tapestry of explanation is based on oral histories gathered from peasants who supported the insurgency and those who did not over a period of many years during and immediately following the war, and interviews with military commanders of both sides. Peasants supported the FMLN, Wood found, not for any material gain that was contingent on their participation, but rather for moral and emotional reasons. Wood's alternative model places emotions and morals, as well as conventional interests, at the heart of collective action.

'Elisabeth Jean Wood's Insurgent Collective Action and Civil War in El Salvador is a scholastic tour de force that can, on the one hand, be described as the latest addition to that canon of classic works seeking to explain peasant insurgency, while on the other as offering a radical and novel account of campesino motivations ... detailed and comprehensive ... novel and innovative ... Her conclusions open a new chapter in the study of peasant rebellion.' Latin American Review of Books
"...worthwhile, because [Wood] manages to bring the war before the reader's eyes, primarily through the words of the many men and women she interviewed over a period of almost 10 years...The very fact that so many people were willing to speak with her testifies to the level of trust she achieved with them." America
"Elisabeth Wood's rigorous study of individual motivations and mobilization in El Salvador will be required reading for students of collective action and civil war. Her unique combination of rich ethnography and rigorous theory represents social science at its best." Stathis N. Kalyvas, Yale University
"This book addresses an absolutely fundamental question in both social history and the study of revolutions: Under what circumstances and with what motivations do rural people mobilize collectively to achieve change? Building on ethnographic fieldwork and oral histories, Wood argues that the actions of rural people in El Salvador constituted an 'assertion of citizenship' not reducible to any calculation of the probability of altering outcomes or achieving exclusive benefits. With a delicate sense of social process, she demonstrates the 'pleasures of agency' that were possible even in the shadow of civil war. This is an elegant, important, and inspiring study." Rebecca J. Scott, University of Michigan
"Wood shares with us the voices and experiences of Salvadorans who, most extraordinarily, were interviewed in large numbers over many years and with amazing diligence and intensity by the author, despite their contemporary involvements in a hideously violent civil war. Particularly notable is her careful, even meticulous, discussion of the problems of establishing 'real' memories in such a setting. She is also good, very good, at dissecting debates about collective action theories and theories of revolution. And the discussions about the social import of mapmaking are just flat out lovely and feel so very human, which is (alas) not something you can say very often about a work of sophisticated social science. While her own discipline is political science, she draws on and herself surely enriches the fields of sociology, anthropology, cultural studies, and Latin American studies writ large." Timothy Wickham-Crowley, Georgetown University
"This is a well-written and enlightening book, exemplary in its clear and convincing discussion of methodological choices, empirical data, and theoretical explanation." Contemporary Sociology, Jon Shefner, University of Tennessee
"Wood goes beyond the traditional revolutionary intellectuals' accounts that tend to dominate the discussion of revolutionary action to describe the formation of revolutionary identity among campesinos in El Salvador's rural areas" -Ryan Wilson, Latin American Perspectives

List of illustrations and tables; Preface and acknowledgments; List of abbreviations; 1. The puzzle of insurgent collective action; 2. Ethnographic research in the shadow of civil war; 3. Redrawing the boundaries of class and citizenship; 4. From political mobilization to armed insurgency; 5. The political foundations of dual sovereignty; 6. The re-emergence of civil society; 7. Campesino accounts of insurgent participation; 8. Explaining insurgent collective action; Epilogue: legacies of an agrarian insurgency; Appendix: A model of high-risk collective action by subordinate social actors; Chronology of El Salvador's civil war; List of references.