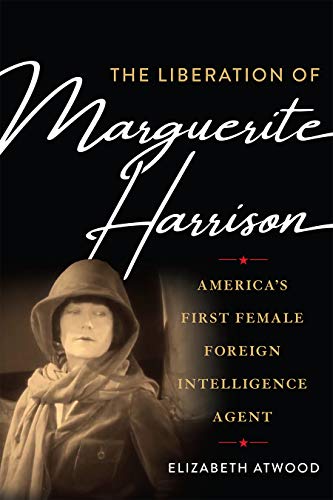 The Liberation of Marguerite Harrison by Elizabeth Atwood

In September 1918, World War I was nearing its end when Marguerite E. Harrison, a thirty-nine-year-old Baltimore socialite, wrote to the head of the US Army's Military Intelligence Division (MID) asking for a job. The director asked for clarification. Did she mean a clerical position? No, she told him. She wanted to be a spy.

In September 1918, World War I was nearing its end when Marguerite E. Harrison, a thirty-nine-year-old Baltimore socialite, wrote to the head of the U.S. Army's Military Intelligence Division (MID) asking for a job. The director asked for clarification. Did she mean a clerical position? No, she told him. She wanted to be a spy.

Harrison, a member of a prominent Baltimore family, usually got her way. She had founded a school for sick children and wangled her way onto the staff of the Baltimore Sun. Fluent in four languages and knowledgeable of Europe, she was confident she could gather information for the U.S. government. The MID director agreed to hire her, and Marguerite Harrison became America's first female foreign intelligence officer.

For the next seven years, she traveled to the world's most dangerous places--Berlin, Moscow, Siberia, and the Middle East--posing as a writer and filmmaker in order to spy for the U.S. Army and U.S. Department of State. With linguistic skills and knack for subterfuge, Harrison infiltrated Communist networks, foiled a German coup, located American prisoners in Russia, and probably helped American oil companies seeking entry into the Middle East. Along the way, she saved the life of King Kong creator Merian C. Cooper, twice survived imprisonment in Russia, and launched a women's explorer society whose members included Amelia Earhart and Margaret Mead.

As incredible as her life was, Harrison has never been the subject of a published book-length biography. Past articles and chapters about her life relied heavily on her autobiography published in 1935, which omitted and distorted key aspects of her espionage career. Elizabeth Atwood draws on newly discovered documents in the U.S. National Archives, as well as Harrison's prison files in the archives of the Russian Federal Security Bureau in Moscow, Russia. Although Harrison portrayed herself as a writer who temporarily worked as a spy, this book documents that Harrison's espionage career was much more extensive and important than she revealed. She was one of America's most trusted agents in Germany, Russia and the Middle East after World War I when the United States sought to become a world power.
NGR9781682475270
9781682475270
1682475271
The Liberation of Marguerite Harrison: America's First Female Foreign Intelligence Agent by Elizabeth Atwood
Elizabeth Atwood
New
Hardback
Naval Institute Press
2020-08-30
320
N/A
Book picture is for illustrative purposes only, actual binding, cover or edition may vary.
This is a new book - be the first to read this copy. With untouched pages and a perfect binding, your brand new copy is ready to be opened for the first time
Trustpilot