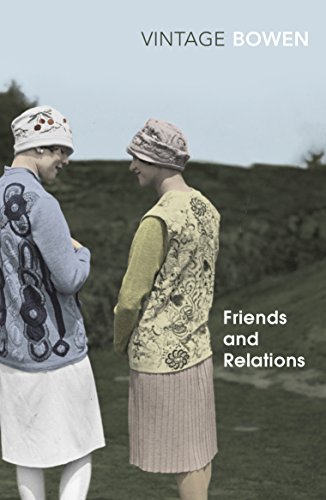 Friends And Relations
by Elizabeth Bowen

In Stock
$13.49
+10% GST
Two of Bowen's most memorable characters are in attendance: Lady Elfrida, a creature of privilege, and Theodora Thirdman, a gawky teenager with zero self-awareness. The sunset of prosperity is upon this complacent, moneyed class, but Bowen's precise and beautiful prose pins real pain and comedy upon its inhabitants.
Very Good Good Well Read
Only 1 left

Friends And Relations by Elizabeth Bowen

Two sisters, two weddings, just months apart. These marriages produce a tangle of friends, relations and lovers that starts to unravel ten years later, during one intense week. Two of Bowen's most memorable characters are in attendance: Lady Elfrida, a creature of privilege, and Theodora Thirdman, a gawky teenager with zero self-awareness. The sunset of prosperity is upon this complacent, moneyed class, but Bowen's precise and beautiful prose pins real pain and comedy upon its inhabitants.

"Bowen is a tough old bird. And once you're on her side, it's going to be a loyal alliance. Because it's nice to have a writer who will never lie to you. Not even to make you feel a little better" * Kirkus *
"Bowen wrote numerous great novels, including Friends and Relations...about how telephones have infiltrated our thinking and desires: waiting for a call, being interrupted by a call, not knowing what might be announced" * Guardian *
"There is much to savour, enjoy, intrigue and shock in this wonderful novel. Bowen is sublime" * Book Snob *

Elizabeth Bowen was born in Dublin in 1899, the only child of an Irish lawyer and landowner. She was educated at Downe House School in Kent. Her book Bowen's Court (1942) is the history of her family and their house in County Cork, and Seven Winters (1943) contains reminiscences of her Dublin childhood. In 1923 she married Alan Cameron, who held an appointment with the BBC and who died in 1952. She travelled a good deal, dividing most of her time between London and Bowen's Court, which she inherited. Elizabeth Bowen is considered by many to be one of the most distinguished novelists of the twentieth century. Her first book, a collection of short stories, Encounters, appeared in 1923, followed by another, Ann Lee's, in 1926. The Hotel(1927) was her first novel, and was followed by The Last September (1929), Joining Charles(1929), another book of short stories, Friends and Relations (1931), To the North (1932), The Cat Jumps (short stories, 1934), The House in Paris(1935), The Death of the Heart (1938), Look at All Those Roses (short stories, 1941), The Demon Lover (short stories, 1945), The Heat of the Day(1949), Collected Impressions (essays, 1950), The Shelborne (1951), A World of Love (1955), A Time in Rome (1960), Afterthought (essays, 1962), The Little Girls (1964), A Day in the Dark(1965) and her last book Eva Trout (1969). She was awarded the CBE in 1948, and received honorary degrees from Trinity College, Dublin in 1949, and from Oxford University in 1956. In the same year she was appointed Lacy Martin Donnelly Fellow at Bryn Mawr College in the United States. The Royal Society of Literature made her a Companion of Literature in 1965. Elizabeth Bowen died in 1973.

GOR002638927
Friends And Relations by Elizabeth Bowen
Elizabeth Bowen
Used - Very Good
Paperback
Vintage Publishing
1999-06-03
176
0099287757
9780099287759
N/A
Book picture is for illustrative purposes only, actual binding, cover or edition may vary.
This is a used book - there is no escaping the fact it has been read by someone else and it will show signs of wear and previous use. Overall we expect it to be in very good condition, but if you are not entirely satisfied please get in touch with us.