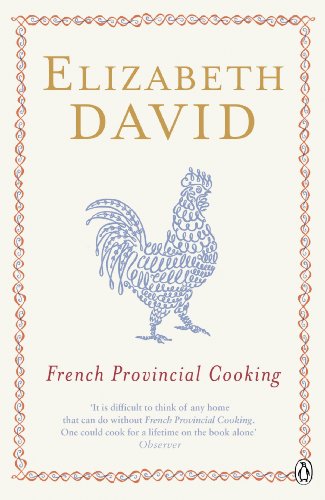 In Stock
$23.49
inc. GST
Suitable for those wanting to bring a little France into their home, this title provides simple recipes like omelettes, souffles, soups and salads. It also offers more complex fare such as pates, cassoulets, roasts and puddings.
Like New Very Good Good Well Read
Only 1 left

First published in 1960, it is readable, inspiring and entertainingly informative. French Provincial Cooking by Elizabeth David is the perfect place to go for anyone wanting to bring a little France into their home.

'When you read Elizabeth David, you get perfect pitch. There is an understanding and evocation of flavours, colours, scents and places that lights up the page' Guardian

Elizabeth David (1913-1992) is the woman who changed the face of British cooking. Having travelled widely during the Second World War, she introduced post-war Britain to the sun-drenched delights of the Mediterranean and her recipes brought new flavours and aromas into kitchens across Britain. After her classic first book Mediterranean Food followed more bestsellers, including French Country Cooking, Summer Cooking, French Provincial Cooking, Italian Food, Elizabeth David's Christmas and At Elizabeth David's Table.

Elizabeth David (1913-1992) travelled widely during the Second World War, throughout Europe, the Middle East and India. She returned to England in 1946 to write the classic Mediterranean Food, followed by five other books that all became bestsellers. Also a prolific journalist, she was made a Fellow of the Royal Society of Literature in 1982, and a CBE in 1986.

GOR010240049
French Provincial Cooking by Elizabeth David
Elizabeth David
Used - Like New
Paperback
Penguin Books Ltd
1998-04-30
592
0140273263
9780140273267
N/A
Book picture is for illustrative purposes only, actual binding, cover or edition may vary.
This is a used book - there is no escaping the fact it has been read by someone else and it will show signs of wear and previous use. Overall we expect it to be in very good condition, but if you are not entirely satisfied please get in touch with us.