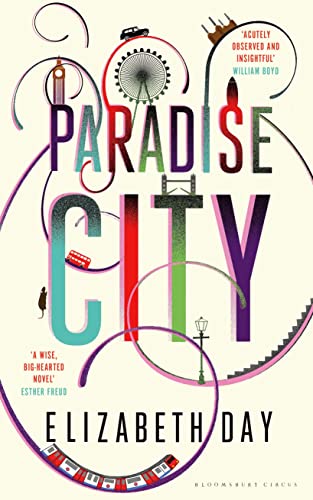 Beatrice Kizza, a woman in flight from a homeland that condemned her for daring to love, flees to London. There, she shields her sorrow from the indifference of her adopted city, and navigates a night-time world of shift-work and bedsits. Howard Pink is a self-made millionaire who has risen from Petticoat Lane to the mansions of Kensington on a tide of determination and bluster. Yet self-doubt still snaps at his heels and his life is shadowed by the terrible loss that has shaken him to his foundations. Carol Hetherington, recently widowed, is living the quiet life in Wandsworth with her cat and The Jeremy Kyle Show for company. As she tries to come to terms with the absence her husband has left on the other side of the bed, she frets over her daughter's prospects and wonders if she'll ever be happy again. Esme Reade is a young journalist learning to muck-rake and doorstep in pursuit of the elusive scoop, even as she longs to find some greater meaning and leave her imprint on the world. Four strangers, each inhabitants of the same city, where the gulf between those who have too much and those who will never have enough is impossibly vast. But when the glass that separates Howard's and Beatrice's worlds is shattered by an inexcusable act, they discover that the capital has connected them in ways they could never have imagined.

An acutely observed and insightful portrait of contemporary urban life. Audacious, funny and shrewdly telling - written with tremendous confidence and brio -- William Boyd
A wise, big-hearted novel. I was utterly caught up in Day's four interweaving lives -- Esther Freud
Combines great story-telling with finely detailed characterisation: a literary page-turner -- David Baddiel
A beautiful portrait not only of four lives but of a city - London springs vividly to life in this tender, absorbing novel. Elizabeth Day is a wonderful story-teller * Francesca Segal *
The four desperate Londoners forge life-changing connections in this ambitious novel. Day's protagonists are rounded and believable, and the big city - in all its maddening, bustling glory - is the unofficial fifth character * Glamour *
As a state-of-the-city novel, it's richer than John Lanchester's Capital and less pleased with itself than Ian McEwan's Saturday. * Evening Standard *
Elizabeth Day's third novel is her most accomplished yet ... The most impressive and intriguing character by far, however, is Beatrice. Day's portrayal of her is complex and frequently surprising ... Day has an admirable ability to explore uncomfortable issues (child abuse, grief and murder) without reaching for easy conclusions -- Alex Peake-Tomkinson * Guardian *
In a compelling and confident piece of storytelling, Elizabeth Day's third novel shows us four individuals adrift in the great crucible of London ... Thoughtful, humane and wonderfully observed, this is a convincing portrait of life in our mighty metropolis -- Simon Humphreys * Mail on Sunday *
Day has demonstrable empathy for the outsider in all of us ... She has a sharp, satirical eye and, as a journalist, she is particularly delicious on the grubbier workings of the newspaper industry -- Claire Allfree * Daily Mail *
The author's design aligns these disparate characters in a system of partial mirrorings. This is interesting and thought-provoking, undermining the reader's expectation of nemesis for the perpetrator ... Paradise City is a moral fable, concerned with issues of guilt, contrition and atonement -- Stevie Davies * Independent *
All have experienced loss - of a partner, a child, a parent, a country. It's a subject Day explores brilliantly in this witty, moving novel as the lives of Beatrice, Carol, Esme and Howard become dramatically intertwined -- Anna Carey * Irish Times *
Many novels can make us care about their characters, but it's rare to read one that inspires a deep concern for our fellow humans * Evening Standard Books of the Year *
Follows John Lanchester's Capital and Amanda Craig's Hearts and Minds in its moving and multilayered portrayal of the state of London -- Books of the Year * Observer *
An optimistic narrative energy carries the reader along as all four characters are propelled through a story of self-deception, murder and love **** * Sunday Telegraph *
Day's well-crafted London novel brings its characters and the city to colourful life * Mail on Sunday *

Elizabeth Day is the author of Scissors, Paper, Stone, which won a Betty Trask Award, and Home Fires. She is an award-winning journalist who has worked for the Evening Standard, the Sunday Telegraph and the Mail on Sunday, and is now a feature writer for the Observer. She grew up in Northern Ireland, and currently lives in London. @elizabday www.elizabethdayonline.co.uk

GOR006994217
Paradise City by Elizabeth Day
Elizabeth Day
Used - Very Good
Paperback
Bloomsbury Publishing PLC
2015-05-21
368
1408855003
9781408855003
N/A
Book picture is for illustrative purposes only, actual binding, cover or edition may vary.
This is a used book - there is no escaping the fact it has been read by someone else and it will show signs of wear and previous use. Overall we expect it to be in very good condition, but if you are not entirely satisfied please get in touch with us.