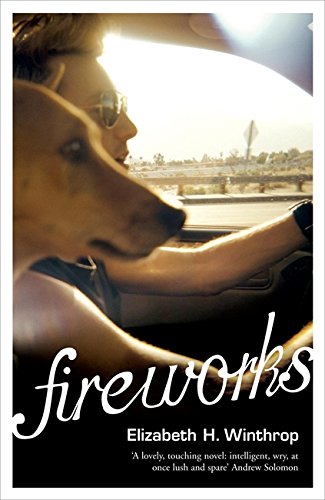 Hollis Clayton is in trouble. Still haunted by his small son's death, stalled in his writing career and over fond of the bottle, he finds himself abandoned by his wife for the summer - or, if he doesn't shape up, for good. But without his emotional anchor, Hollis continues to unravel. Besides, he's busy spying on the neighbours and sharing his meals with a stray dog. When is he going to find the time to get his life back on track?

Here, in the daily rhythms of Hollis's disintegrating life, lies an evisceratingly comic portrait of suburban despair. With this deeply affecting tale of grief and renewal, Elizabeth H. Winthrop makes a striking debut.

'Winthrop sketches her hapless hero with uncommon charm...As his summer slips by, both he and the reader learn to appreciate anew the 'non-stories' that make up life.' * Observer *
'Winthrop proves to be a bitingly intelligent writer who infuses otherwise unremarkable moments with bittersweet pathos.' * New York Times Book Review *
'Combining a light comic touch with a compellingly honest portrayal of her flawed, yet loveable, protagonist, Winthrop has produced a work of psychological acuity and gentle absolution.' * Myslexia *
'With delicate pathos, Elizabeth Winthrop's debut novel conveys how Hollis's life unravels in tiny increments of despair' * Metro *
'A multi-layered tale of life, death and the grey pain of grief. And yet, it is not depressing or pitiful ... [Winthrop's] novel, though slow burning, still manages to be explosive' * Irish Examiner *
'Every fragment is so carefully collected and shown to us by Elizabeth Winthrop, not a mawkish sentence anywhere' * Margaret Forster *
'A lovely, touching novel: intelligent, wry, at once lush and spare' * Andrew Solomon, author of THE NOONDAY DEMON *
'Hollis keeps me on the edge of my seat. He's not like any character I've met...He breaks my heart.' * Geoffrey Wolff *
'Fireworks is suffused with such a beautiful sadness that I felt a little destroyed and remade, myself, after reading it. It's also very funny...Winthrop is simply a brilliant young novelist.' * Brad Watson *
'Brimming with gentle wisdom' * Red Book Magazine *
Winthrop's strong debut is at once a satisfactory portrait of a deeply anguished man and a reflection on how uneventful such anguish can be...Neglecting plot for character is Winthrop's point, and she makes it work through an unforgettable narrator. * Booklist *
'Elizabeth Hartley Winthrop conjures a middle-aged New Englander, Hollis Clayton, whose life in the breakdown lane she lays out with pathos and panache' * Lisa Shea, Elle (US) *
Whereas many authors seem to hold the reader's hand when actually they are holding their character's, Ms. Winthrop believes in her character's thinking...This is writing that lives up to the way real people think about themselves.' * Benjamin Lytal, New York Sun *
Elizabeth H.Winthrop was born and raised in New York City. She graduated from Harvard University in 2001 with a BA in English and American Literature and Language, and in 2004 she received her Master of Fine Arts in fiction from the University of California. Her stories have appeared in a variety of publications including the Missouri Review and the Indiana Review, but FIREWORKS is her first novel. She lives in Savannah, Georgia.
GOR000366830
Fireworks by Elizabeth H. Winthrop
Elizabeth H. Winthrop
Used - Very Good
Paperback
Hodder & Stoughton General Division
2007-07-12
304
0340839538
9780340839539
N/A
Book picture is for illustrative purposes only, actual binding, cover or edition may vary.
This is a used book - there is no escaping the fact it has been read by someone else and it will show signs of wear and previous use. Overall we expect it to be in very good condition, but if you are not entirely satisfied please get in touch with us
Trustpilot