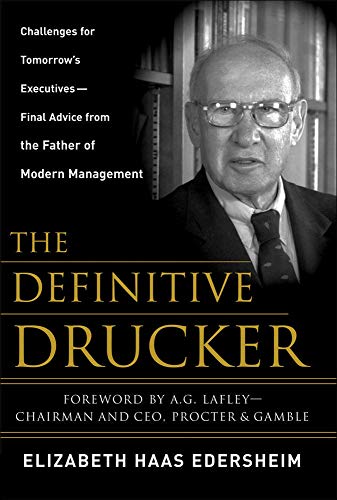 Out of Stock
$12.49
+10% GST
With thorough analysis and insight, this work delivers the business biography of Peter Drucker's most influential concepts, demonstrating how they are shaping each major organization and business trend. It also includes Drucker's perspective on modern business in his own words as told to the author in a series of interviews.
Very Good Good
Only 0 left

"We need a new theory of management. The assumptions built into business today are not accurate."-Peter Drucker

For sixteen months before his death, Elizabeth Haas Edersheim was given unprecedented access to Peter Drucker, widely regarded as the father of modern management. At Drucker's request, Edersheim, a respected management thinker in her own right, spoke with him about the development of modern business throughout his life-and how it continues to grow and change at an ever-increasing rate.

The Definitive Drucker captures his visionary management concepts, applies them to the key business risks and opportunities of the coming decades, and imparts Drucker's views on current business practices, economic changes, and trends-many of which he first predicted decades ago. It also sheds light onto issues such as why so many leaders fail, the fragility of our economic systems, and the new role of the CEO. Drucker's insights are divided into five main themes that the modern organization needs to, as Drucker would say, "create tomorrow" by

Drucker's penetrating questions, posed to those seeking his advice, helped business, corporate, and political leaders throughout the 20th century to see their work in a new perspective, and create phenomenal innovation. Edersheim's extensive interviews with some of these luminaries, including Warren Bennis, Ram Charan, Bill Gates, George Gallup, Jr. and A.G. Lafley offer compelling commentary on Drucker's vast influence.

Delivering keen analysis and revealing insights into business, The Definitive Drucker is a celebration of this extraordinary man and his life's work, as well as a unique opportunity to learn from Drucker's final business lessons how to strategize, compete, and triumph in any market.

"Illuminating... Ms. Edersheim allows a bright light to shine out, even now, from the mind of Peter Drucker." The Wall Street Journal 20070228

Elizabeth Haas Edersheim is a strategic consultant who works both with Fortune 500 companies and private equity investors. Prior to founding her own firm, New York Consulting Partners, Edersheim was one of the first female partners at McKinsey & Company. Her previous book, McKinsey's Marvin Bower, illustrates the business life and ideals of the founder of McKinsey, her mentor, who was also a close friend and peer of Dr. Drucker. Aside from her numerous publications, Dr. Haas Edersheim has provided expert testimony to the U. S. Congress on Industrial Networking and Industrial Manufacturing policy.

Chapter 1: The New Challenges For Management In The 21st Century

Chapter 7: The Role of the CEO

GOR002673818
The Definitive Drucker by Elizabeth Haas Edersheim
Elizabeth Haas Edersheim
Used - Very Good
Hardback
McGraw-Hill Education - Europe
2007-01-01
256
0071472339
9780071472333
N/A
Book picture is for illustrative purposes only, actual binding, cover or edition may vary.
This is a used book - there is no escaping the fact it has been read by someone else and it will show signs of wear and previous use. Overall we expect it to be in very good condition, but if you are not entirely satisfied please get in touch with us.