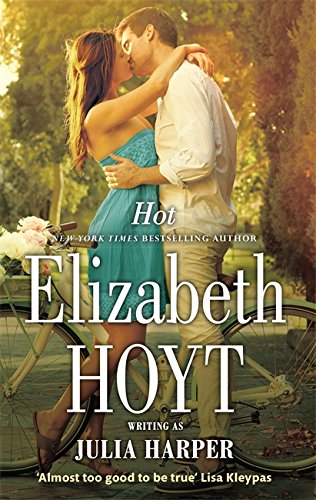 A Woman With a Plan

For most people, being held at gunpoint by inept bank robbers would make for a bad day. For local librarian Turner Hastings, it's an opportunity. Using the distraction to pull a little heist of her own, she dives into a new life . . . on the run.

A Cop on a Mission

FBI Special Agent John MacKinnon always gets his man . . . or woman. After watching Turner Hastings dump the contents of a safety deposit box into her purse on a surveillance tape, he knows this case won't be run of the mill. What he doesn't expect is how the cellphone contact between him and his bounty is about to blur the line between professional ambition and personal desire. When bullets from a hired hitman start flying in Turner's direction, giving weight to her claims of injustice, John is willing to cross any line to save her life . . . even if it means losing his own.

Things Are Getting HOT.

'Elizabeth Hoyt's historicals are hot, and her contemporaries deserve the same label. This is a great novel.' - Eloisa James

'Fast paced and funny, this novel reads like Janet Evanovich crossed with The Sopranos.' RT Book Reviews on For the Love of Pete

Elizabeth Hoyt's historicals are hot, and her contemporaries deserve the same label. This is a great novel. - Eloisa JamesFast paced and funny, this novel reads like Janet Evanovich crossed with The Sopranos. - RT Book Reviews onFor the Love of Pete
Elizabeth Hoyt is the New York Times bestselling author of over seventeen lush historical romances including the Maiden Lane series. Publishers Weekly has called her writing "mesmerizing." She also pens deliciously fun contemporary romances under the name Julia Harper. Elizabeth lives in Minneapolis, Minnesota, with three untrained dogs, a garden in constant need of weeding, and the long-suffering Mr. Hoyt.
GOR010298172
9780349408613
0349408610
Hot by Elizabeth Hoyt
Elizabeth Hoyt
Used - Like New
Paperback
Little, Brown Book Group
2015-02-24
400
N/A
Book picture is for illustrative purposes only, actual binding, cover or edition may vary.
The book has been read, but looks new. The book cover has no visible wear, and the dust jacket is included if applicable. No missing or damaged pages, no tears, possible very minimal creasing, no underlining or highlighting of text, and no writing in the margins
Trustpilot