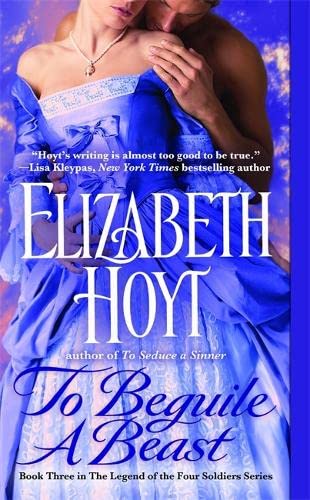 To Beguile A Beast by Elizabeth Hoyt

To Beguile A Beast: Number 3 in series by Elizabeth Hoyt

Sir Alistair Munroe is a naturalist knighted for his service to the crown during the French and Indian War - a war that left him horribly maimed. Because of his scars he lives a near solitary existence in a crumbling Scottish castle. Until a dark and stormy night when he opens the door to a buxom beauty claiming to be his new housekeeper.

Helen Fitzwilliam has led a life full of mistakes, not least among them spending the last ten years as mistress to the Duke of Lister, a man without any kindness. But when the duke takes a new, younger mistress, Helen makes a decision she knows isn't a mistake. She leaves the duke, taking with her their two young children. Knowing that Lister hates to give up anything--even a mistress he's cast aside--Helen flees to Scotland and the home of a man she's never met.

These two wounded souls find an undeniable passion, and love, in each others arms, but the bliss of their relationship isn't to last. The Duke steals his children away from Helen, forcing her to reveal her true past to Alistair, and a friend from Alistair's army past is back from the dead--and quite possibly involved in the betrayal that lead to the massacre of their regiment

"A sexy, steamy treat!"---Connie Brockway, USA Today bestselling author on THE RAVEN PRINCE
"Elizabeth Hoyt writes with flair, sophistication, and unstoppable passion."---Julianne MacLean, author of PORTRAIT OF A LOVER
"Prepare to be seduced! Hoyt's writing is almost too good to be true."--Lisa Kleypas, New York Times bestselling author
"The new master of the hisorical romance genre."---HistoricalRomanceWriters.com
"There's enchantment in Hoyt's stories that makes you believe in the magic of love."---Romantic Times BOOKreviews Magazine
"41/2 Stars! TOP PICK! Fantastic...magically blends fairytale, reality, and romance in a delicious, sensual feast."--Romantic Times BOOKreviews Magazine
Elizabeth Hoyt/Julia Harper lives with three untrained dogs, two angelic, but bickering children, and one long-suffering husband.
GOR001992474
9780446406932
0446406937
To Beguile A Beast: Number 3 in series by Elizabeth Hoyt
Elizabeth Hoyt
Legend of the Four Soldiers
Used - Very Good
Paperback
Little, Brown & Company
2009-05-01
352
Commended for Rita Awards (Historical) 2010
Book picture is for illustrative purposes only, actual binding, cover or edition may vary.
This is a used book - there is no escaping the fact it has been read by someone else and it will show signs of wear and previous use. Overall we expect it to be in very good condition, but if you are not entirely satisfied please get in touch with us
Trustpilot