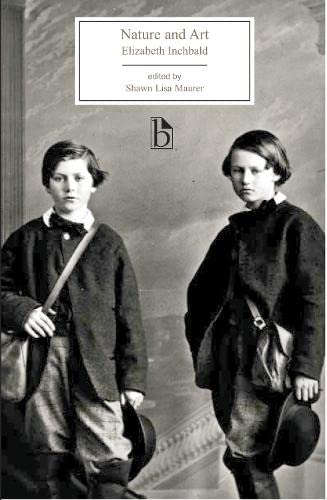 Nature and Art
by Elizabeth Inchbald

Used Price
$36,99
inc. GST
Free Shipping in Australia
Commands a central place in the history of the English Jacobin novel. Published in 1796, the story explores the opposition between the upbringing and actions of Henry Norwynne, an unspoiled 'child of nature' who has been reared without books on an African island, and the corrupt conduct of his aristocratic older cousin, William.
Reviews:
Trustpilot
Very Good

Nature and Art by Elizabeth Inchbald

Nature and Art commands a central place in the history of the English Jacobin novel. Published in 1796, the story explores the opposition between the upbringing and actions of Henry Norwynne, an unspoiled "child of nature" who has been reared without books on an African island, and the corrupt conduct of his aristocratic older cousin, William. Inchbald was one of the best-known writers of her time, and Nature and Art represents her most concerted attempt to analyze the effects of education, power, and privilege on human behaviour.

This Broadview edition includes a critical introduction, contemporary reviews of the novel, and primary source material relating to the novel's composition and its philosophical influences (including documents by Jean-Jacques Rousseau and William Godwin). Documents on education, political and religious corruption, and African colonization provide further historical context.

Elizabeth Inchbald was arguably one of the most important literary figures working in Britain in the early Romantic period, but the complexity of her career has been obscured both by the hybridity of her output and by the recent unavailability of key texts. Shawn Lisa Maurer's edition of Nature and Art brings a crucial, yet troubling, work to a wider reading public. Her superb introduction and the edition's contextual materials open up the novel's political imperatives without closing down some of its more difficult elements. This edition is certain to spark further re-evaluation of the place of feminist practice in Romantic studies and of Inchbald's place in British culture." - Daniel O'Quinn, University of Guelph

"With this impressively researched and compellingly introduced edition, Shawn Lisa Maurer secures Nature and Art's important place in late eighteenth-century thought. This edition is to be commended for its expertly chosen contextual materials, which position Nature and Art within crucial debates concerning education and politics and also provide contemporary accounts of Sierra Leone and examples of critical responses to the novel and Inchbald. Maurer makes the ideological concerns and aesthetic delights of this novel clear; it is essential reading for students of the novel, the eighteenth century, gender studies, and philosophical and political literature." - Cheryl Nixon, University of Massachusetts Boston

Shawn Lisa Maurer is Associate Professor of English at The College of the Holy Cross, Worcester, Massachusetts. She is the author of Proposing Men: Dialectics of Gender and Class in the Eighteenth-Century English Periodical (Stanford University Press, 1998).

GOR002158159
Nature and Art by Elizabeth Inchbald
Elizabeth Inchbald
Broadview Editions
Used - Very Good
Paperback
Broadview Press Ltd
2004-12-15
239
1551112787
9781551112787
N/A
Book picture is for illustrative purposes only, actual binding, cover or edition may vary.
This is a used book - there is no escaping the fact it has been read by someone else and it will show signs of wear and previous use. Overall we expect it to be in very good condition, but if you are not entirely satisfied please get in touch with us.