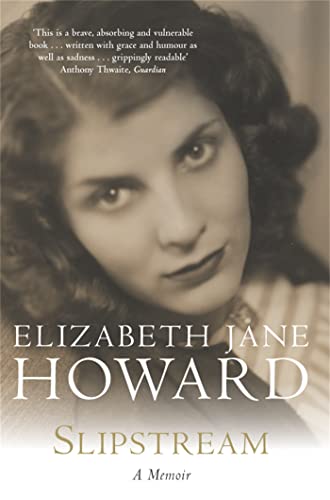 In this candid and revealing memoir, Elizabeth Jane Howard looks back over the course of her eventful life, providing a story of as full of love, passion and betrayal as her novels.

Slipstream brilliantly illuminates the literary world of the latter half of the 20th century, as well as giving a highly personal insight into the life of Elizabeth Jane Howard, one of our most beloved British writers.

Born in London in 1923, Elizabeth Jane Howard was privately educated at home, moving on to short-lived careers as an actress and model, before writing her first acclaimed novel, The Beautiful Visit, in 1950. She has written many highly regarded novels, including Falling and After Julius. Her Cazalet Chronicles have become established as modern classics and were adapted for a major BBC television series and for BBC Radio 4.

She has been married three times - firstly to Peter Scott, the naturalist and son of Captain Scott, and most famously and tempestuously to Kingsley Amis. It was Amis' son by another marriage, Martin, to whom she introduced the works of Jane Austen and ensured that he received the education that would be the grounding of his own literary career. Her closest friends have included some of the greatest writers and thinkers of the day: Laurie Lee, Arthur Koestler and Cecil Day-Lewis, among others.

Elizabeth Jane Howard was the author of fifteen highly acclaimed novels. The Cazalet Chronicles - The Light Years, Marking Time, Confusion, Casting Off and All Change - have become established as modern classics and have been adapted for a major BBC television series and for BBC Radio 4. In addition to the Cazalet Chronicles, she also wrote numerous other novels, short stories and her autobiography, Slipstream. In 2002 she was awarded a CBE in the Queen's Birthday Honours List. She died, aged ninety, at home in Suffolk on 2 January 2014.
GOR001415911
Slipstream: A Memoir by Elizabeth Jane Howard
Elizabeth Jane Howard
Used - Very Good
Paperback
Pan Macmillan
2003-06-06
528
0330484052
9780330484053
N/A
Book picture is for illustrative purposes only, actual binding, cover or edition may vary.
This is a used book - there is no escaping the fact it has been read by someone else and it will show signs of wear and previous use. Overall we expect it to be in very good condition, but if you are not entirely satisfied please get in touch with us
Trustpilot