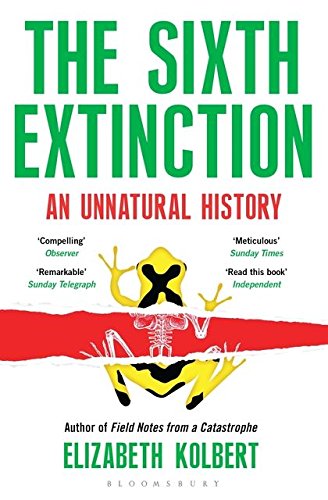 The Sixth Extinction
by Elizabeth Kolbert

The Sixth Extinction: An Unnatural History by Elizabeth Kolbert

Over the last half a billion years, there have been five mass extinctions of life on earth. Scientists around the world are currently monitoring the sixth, predicted to be the most devastating extinction event since the asteroid impact that wiped out the dinosaurs. Elizabeth Kolbert combines brilliant field reporting, the history of ideas and the work of geologists, botanists and marine biologists to tell the gripping stories of a dozen species - including the Panamanian golden frog and the Sumatran rhino - some already gone, others at the point of vanishing. The sixth extinction is likely to be mankind's most lasting legacy and Elizabeth Kolbert's book urgently compels us to rethink the fundamental question of what it means to be human.

A distinctive and eloquent voice of conscience ... In her timely, meticulously researched and well-written book, Kolbert combines scientific analysis and personal narratives to explain it to us. The result is a clear and comprehensive history of earth's previous mass extinctions ... "People change the world," Kolbert writes, and vividly presents the science and history of the current crisis. Her extensive travels in researching this book, and her insightful treatment of both the history and the science all combine to make The Sixth Extinction an invaluable contribution to our understanding of present circumstances, just as the paradigm shift she calls for is sorely needed * Al Gore, New York Times *
I tore through Elizabeth Kolbert's The Sixth Extinction with a mix of awe and terror. Her long view of extinction excited my joy in life's diversity - even as she made me aware how many species are currently at risk * Dava Sobel, author of Longitude and A More Perfect Heaven *
Elizabeth Kolbert writes with an aching beauty of the impact of our species on all the other forms of life known in this cold universe. The perspective is at once awe-inspiring, humbling and deeply necessary * T.C. Boyle *
Well-composed snapshots of history, theory and observation that will fascinate, enlighten and appal many readers * Guardian *
Compelling ... It is a disquieting tale, related with rigour and restraint by Kolbert * Observer *
Passionate ... This is the big story of our age. We are living through the historically rare elimination of vast numbers of species. And for the first time, it is our fault ... Uplifting prose about the wonders of nature. But the overwhelming message of this book is as clear as that of Rachel Carson's Silent Spring in 1962. We humans have become a geological force in our own right - and, unless we act, the consequences will be devastating * Sunday Times *
It is oddly pleasurable to read Elizabeth's Kolbert's new book, which offers a ramble through mass extinctions, present and past ... A wonderful chapter covers the North Atlantic's once-abundant, flightless great auks ... Wisely, Ms Kolbert refuses to end on an optimistic note * Economist *
While plants and animals can evolve to cope with a hotter world, that will take far too long for humans ... That is ultimately what makes this engaging study scary * Scotland on Sunday *
The scariest paperback of the year * Guardian *

Elizabeth Kolbert was a New York Times reporter for fourteen years until she became a staff writer at the New Yorker in 1999. She is the author of Field Notes from a Catastrophe: A Frontline Report on Climate Change. She lives in Massachusetts with her husband and children. @ElizKolbert

GOR006702026
The Sixth Extinction: An Unnatural History by Elizabeth Kolbert
Elizabeth Kolbert
Used - Like New
Paperback
Bloomsbury Publishing PLC
2015-01-01
336
1408851245
9781408851241
N/A
Book picture is for illustrative purposes only, actual binding, cover or edition may vary.
The book has been read, but looks new. The book cover has no visible wear, and the dust jacket is included if applicable. No missing or damaged pages, no tears, possible very minimal creasing, no underlining or highlighting of text, and no writing in the margins.