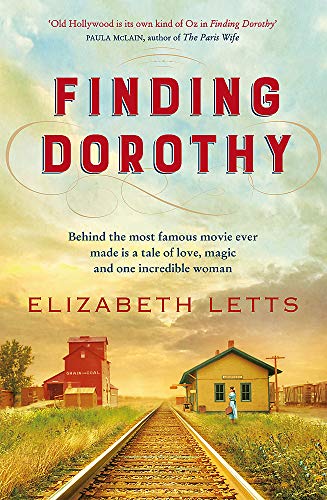 Behind the most famous movie ever made is a tale of love, magic and one incredible woman

'A captivating and insightful backstage pass into a timeless classic'
Candis

Behind the most famous movie ever made is a tale of love, magic and one incredible woman

Hollywood, 1938: As soon as she learns that M-G-M is adapting her late husband's masterpiece, The Wonderful Wizard of Oz, for the screen, Maud Gage Baum sets about trying to visit the set.
Nineteen years after Frank's passing, Maud is the only person who can help the producers stay true to the spirit of the book - because she's the only one left who knows its secrets...

But the moment she hears Judy Garland rehearsing the first notes of 'Over the Rainbow', Maud recognizes the yearning that defined her own life story, from her rebellious youth as a suffragette's daughter to her coming of age as one of the first women in the Ivy League, from her blossoming romance with Frank to the hardscrabble prairie years that inspired his famous work. With the young actress under pressure from the studio as well as her ambitious stage mother, Maud resolves to protect her - the way she tried so hard to protect the real Dorothy.

This richly imagined novel tells the story behind The Wonderful Wizard of Oz, the book that inspired the iconic film, through the eyes of author L. Frank Baum's intrepid wife, Maud.

'Maud's life behind-the-scenes and the making of the film are uncovered in a thrilling, magical way'
My Weekly

Engrossing . . . Letts expertly illuminates the true story behind the tale beloved by so many readers through history, but best of all is the wonderful depiction of Maud [Gage Baum] herself.This is a crowd-pleasing, thoroughly satisfying novel * Publishers Weekly *
A captivating and insightful backstage pass into a timeless classic * Candis *
An absorbing read * Kirkus *
Maud's life behind-the-scenes and the making of the film are uncovered in a thrilling, magical way * My Weekly *
A well-researched, Technicolor delight. I've loved The Wizard of Oz, the book and the movie, since I was a little girl, and this novel feels like an exclusive backstage pass to both * Eowyn Ivey, bestselling author of The Snow Child and To the Bright Edge of the World *
A breathtaking read that will transport you over the rainbow . . . Gripping, fascinating, this is a novel for anyone who ever stared in awe as Oz came to life on screen, and wondered what other secrets lay hidden behind the curtain. A dream of a book you'll want to savor and share! * Lisa Wingate, New York Times bestselling author of Before We Were Yours *
Old Hollywood is its own kind of Oz in Elizabeth Letts' Finding Dorothy, complete with false dazzle and complex combinations of threat and allure. But what really satisfies here is the unlikely friendship between L. Frank Baum's unsinkable widow, Maud, and the young Judy Garland, on the vulnerable cusp of fame. It's an alliance that seems touched with magic and serendipity and something even more transformative, true understanding between women * Paula McLain, New York Times bestselling author of Love and Ruin *
Beautifully researched and written, Finding Dorothy pulls back the curtain on a fascinating relationship behind the making of The Wizard of Oz * Martha Hall Kelly, New York Times bestselling author of Lilac Girls *
A woman with a heart, a brain, courage to spare and a girl's sense of wonder-this is the heroine of Elizabeth Letts's sparkling, touching Finding Dorothy . . . With a sprinkling of Hollywood stardust, Letts spins a magical tale about a classic book and movie, both, as seen through the eyes of this remarkable, redoubtable heroine for the ages * Melanie Benjamin, New York Times bestselling author of The Aviator's Wife and The Swans of Fifth Avenue *
Letts takes readers on an unflinching journey between hardship and hope, with a catch-your-breath ending too magical to be anything but true. Fans of The Wizard of Oz book, the movie, Judy Garland, and the Golden Age of Hollywood will thank Letts for taking them over the rainbow all over again * Pam Jenoff, New York Times bestselling author of The Orphan's Tale *
One of my favourite personal reads so far this year and I can also recommend it highly for book groups * New Books Magazine *
A riveting read * Yours *
An endearing novel * Choice Magazine *
Elizabeth Letts is the #1 New York Times bestselling author of The Eighty-Dollar Champion and The Perfect Horse, which won the 2017 PEN Center USA Literary Award for research nonfiction, as well as two previous novels, Quality of Care and Family Planning. A former certified nurse-midwife, she also served in the Peace Corps in Morocco. She lives in Southern California and Northern Michigan.
GOR009739639
Finding Dorothy by Elizabeth Letts
Elizabeth Letts
Used - Very Good
Hardback
Quercus Publishing
2019-04-04
368
1529403448
9781529403442
N/A
Book picture is for illustrative purposes only, actual binding, cover or edition may vary.
This is a used book - there is no escaping the fact it has been read by someone else and it will show signs of wear and previous use. Overall we expect it to be in very good condition, but if you are not entirely satisfied please get in touch with us.
Trustpilot