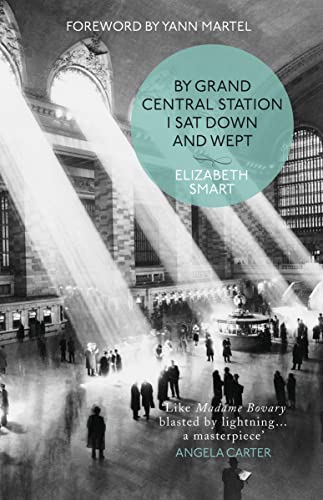 Elizabeth Smart's passionate fictional account of her intense love-affair with the poet George Barker, described by Angela Carter as `Like MADAME BOVARY blasted by lightning ... A masterpiece'.

By Grand Central Station I Sat Down and Wept Summary

Elizabeth Smart's passionate fictional account of her intense love-affair with the poet George Barker, described by Angela Carter as `Like MADAME BOVARY blasted by lightning ... A masterpiece'.

One day, while browsing in a London bookshop, Elizabeth Smart chanced upon a slim volume of poetry by George Barker - and fell passionately in love with him through the printed word. Eventually they communicated directly and, as a result of Barker's impecunious circumstances, Elizabeth Smart flew both him and his wife from Japan, where he was teaching, to join her in the United States. Thus began one of the most extraordinary, intense and ultimately tragic love affairs of our time. They never married but Elizabeth bore George Barker four children and their relationship provided the impassioned inspiration for one of the most moving and immediate chronicles of a love affair ever written - `By Grand Central Station I Sat Down and Wept'.

Originally published in 1945, this remarkable book is now widely identified as a classic work of poetic prose which, seven decades later, has retained all of its searing poignancy, beauty and power of impact.

Customer Reviews - By Grand Central Station I Sat Down and Wept

By Grand Central Station I Sat Down and Wept Reviews

`Like Madame Bovary blasted by lightening ... A masterpiece.' Angela Carter

`At some point every good reader comes across "By Grand Central Station I sat Down and Wept". And he or she recognises an emotion essential and permanent to us.' Michael Ondaatje

`A revelation...This short, powerful work has a profound influence on me and was one of the factors that made me want to be a writer.' Beryl Bainbridge

`I doubt if there are more than half a dozen such masterpieces of poetic prose in the world.' Brigid Brophy

`Explores a passion between a man and two women, one of them his wife - a love despairing and triumphant upon which the reader may gaze, awed, appalled, or even, perhaps, envious.' The Times

`Few writers have ever captured the full honesty of what passion means as shockingly and as piercingly as Smart. Today, its force still strikes us hard in the face, a beautiful and bloody blow.' Lesley McDowell, Independent on Sunday

`Constructed as a single, sustained climax, it is like a cry of ecstasy which, without changing volume or pitch, becomes a cry of agony.' Spectator

`The emotion, the truth and abject affliction comes through...to move the reader, and even to awe him.' London Review of Books

Elizabeth Smart was born in Ottawa, Canada, in 1913. She was educated at private schools in Canada and, for a year, at King's College, University of London. Her landmark work, By Grand Central Station I Sat Down and Wept was published in 1945. After the war she supported herself and her family through journalism and advertising work. In 1963 she became literary and associate editor of Queen magazine but subsequently dropped out of the literary scene to live quietly in a remote part of Suffolk. She died in 1986.

GOR001280542
By Grand Central Station I Sat Down and Wept by Elizabeth Smart
Elizabeth Smart
Used - Very Good
Paperback
HarperCollins Publishers
1991-03-27
160
0586090398
9780586090398
N/A
Book picture is for illustrative purposes only, actual binding, cover or edition may vary.
This is a used book - there is no escaping the fact it has been read by someone else and it will show signs of wear and previous use. Overall we expect it to be in very good condition, but if you are not entirely satisfied please get in touch with us.