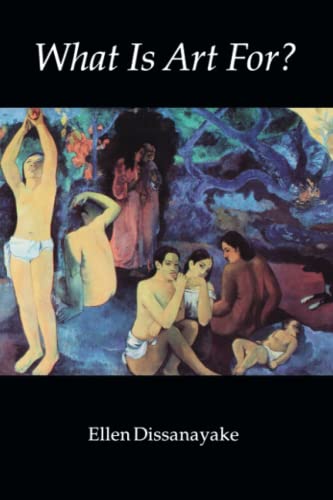 What Is Art For?
by Ellen Dissanayake

What Is Art For? Summary

What Is Art For? by Ellen Dissanayake

Every human society displays some form of behavior that can be called "art," and in most societies other than our own the arts play an integral part in social life. Those who wish to understand art in its broadest sense, as a universal human endowment, need to go beyond modern Western elitist notions that disregard other cultures and ignore the human species' four-million-year evolutionary history.

This book offers a new and unprecedentedly comprehensive theory of the evolutionary significance of art. Art, meaning not only visual art, but music, poetic language, dance, and performance, is for the first time regarded from a biobehavioral or ethical viewpoint. It is shown to be a biological necessity in human existence and fundamental characteristic of the human species.

In this provocative study, Ellen Dissanayake examines art along with play and ritual as human behaviors that "make special," and proposes that making special is an inherited tendency as intrinsic to the human species as speech and toolmaking. She claims that the arts evolved as means of making socially important activities memorable and pleasurable, and thus have been essential to human survival.

Avoiding simplism and reductionism, this original synthetic approach permits a fresh look at old questions about the origins, nature, purpose, and value of art. It crosses disciplinary boundaries and integrates a number of divers fields: human ethology; evolutionary biology; the psychology and philosophy of art; physical and cultural anthropology; "primitive" and prehistoric art; Western cultural history; and children's art. The final chapter, "From Tradition to Aestheticism," explores some of the ways in which modern Western society has diverged from other societies--particularly the type of society in which human beings evolved--and considers the effects of the aberrance on our art and our attitudes toward art.

This book is addressed to readers who have a concerned interest in the arts or in human nature and the state of modern society.

What Is Art For? Reviews

One of the most intellectually enriching interdisciplinary studies of art that has ever been written. It combines breadth of learning with lucidity of thought and expression, in a way that should engage the interest of anyone with a systematic interest in the arts-be it scientific, or from the viewpoint of the humanities.

GOR003939992
What Is Art For? by Ellen Dissanayake
Ellen Dissanayake
Used - Very Good
Paperback
University of Washington Press
1988-06-01
266
0295970170
9780295970172
N/A
Book picture is for illustrative purposes only, actual binding, cover or edition may vary.
This is a used book - there is no escaping the fact it has been read by someone else and it will show signs of wear and previous use. Overall we expect it to be in very good condition, but if you are not entirely satisfied please get in touch with us.