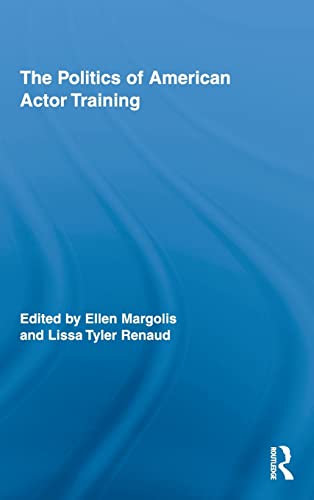 Used Price
$143.99
inc. GST
Free Shipping in Australia
Contributes to the national dialogue the diverse perspectives and proposals needed to keep American actor training dynamic and germane, both within the US and abroad.
Very Good

This book addresses the historical, social, colonial, and administrative contexts that determine today's U.S. actor training, as well as matters of identity politics, access, and marginalization as they emerge in classrooms and rehearsal halls. It considers persistent, questioning voices about our nation's acting training as it stands, thereby contributing to the national dialogue the diverse perspectives and proposals needed to keep American actor training dynamic and germane, both within the U.S. and abroad. Prominent academics and artists view actor training through a political, cultural or ethical lens, tackling fraught topics about power as it plays out in acting curricula and classrooms. The essays in this volume offer a survey of trends in thinking on actor training and investigate the way American theatre expresses our national identity through the globalization of arts education policy and in the politics of our curriculum decisions.

"With The Politics of American Actor Training, coeditors Ellen Margolis and Lissa Tyler Renaud make an important contribution to the fields of theatre history and acting pedagogy. Along with twelve contributors, they have created an excellent publication that moves seamlessly among history, pedagogy, theory, and practice. As such, The Politics of American Actor Training serves several needs and deserves consideration from scholars, teachers, and professional theatre artists alike."
-Steven Harrick, Theatre Topics (USA)

"What is delightful-and, to me, unexpected-about both parts of the anthology is that the editors have taken seriously the politics of American actor training programs not only in the US proper, but also as they are transmitted to other countries and cultures outside US national borders. ... This multicultural perspective broadens the usefulness of the anthology as a whole, and offers an important check on discussions of actor training politics. The authors remind us that the question cannot only be "what do we owe our students and our country in the way of actor training" but also "how do we want to represent our national identity in the broader context of global theatre training practices?"
-Elise Robinson, Voice and Speech Review (International)

Ellen Margolis is Associate Professor and Chair of Theatre, Pacific University, Oregon. She is an award-winning director and actor, with writings published in Radical Acts anthology, in theatre journals and short play collections. As playwright, she has done productions and workshops with Vital Theatre, Theatre Limina, Portland Center Stage/PlayGroup, and received commissions from the Susan G. Komen Foundation and Mile Square Theatre. She served as Literary Director, International Centre for Women Playwrights, 2002-2004. Lissa Tyler Renaud has been Director of California-based Actors' Training Project since 1985. Recipient of National Science Foundation and Ford Foundation grants among others, she spent six years overseas as Visiting Professor/Master Teacher of Directing, Theory, Acting, Voice and Ideokinesis. She is a recitalist and award-winning actress, and lectures and publishes widely on the avant-garde and contemporary actor training, in the U.S. and Asia. She serves as co-editor for the International Association of Theatre Critics.

GOR010385658
The Politics of American Actor Training by Ellen Margolis (Pacific University, USA)
Ellen Margolis (Pacific University, USA)
Routledge Advances in Theatre & Performance Studies
Used - Very Good
Hardback
Taylor & Francis Ltd
2009-09-22
218
0415801214
9780415801218
N/A
Book picture is for illustrative purposes only, actual binding, cover or edition may vary.
This is a used book - there is no escaping the fact it has been read by someone else and it will show signs of wear and previous use. Overall we expect it to be in very good condition, but if you are not entirely satisfied please get in touch with us.