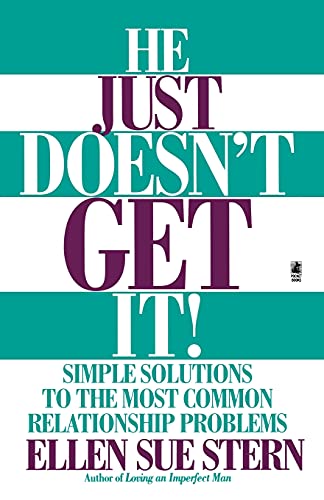 He Just Doesn't Get It
by Ellen Sue Stern

In Stock
$17.99
inc. GST
HE JUST DOESN'T GET IT provides simple solutions to some of the most common relationship problems.
Very Good Well Read
Only 2 left

He Just Doesn't Get It Summary

He Just Doesn't Get It: Simple Solutions to the Most Common Relationship Problems by Ellen Sue Stern

Almost every woman has uttered 'He just doesn't get it!' in frustration when her partner drives her crazy, or to tears. Now this dramatically different relationship guide reveals the hidden reasons why. HE JUST DOESN'T GET IT! offers simple solutions to the problems women have with the infuriating, confusing, difficult, and absolutely wonderful, men they love. Focusing on fifteen of the most common relationship problems, Ellen Sue Stern supplies the answers, and the unseen motivations underlying men's behaviour. She will astonish you with her on-target descriptions of how you react to his behaviour, and how you unwittingly make things worse. With specific advice on what to do when he takes you for granted, accuses you of acting like his mother, or proclaims 'I need more space', she shows you how to turn things around immediately, even if he 'just doesn't get it!' Ellen Sue Stern gives you the power to dramatically improve your relationship, and feel better about yourself while you're at it.

Ellen Sue Stern has more than half a million copies of her books in print worldwide including Loving an Imperfect Man, published by Pocket Books. Thousands of women have attended her seminars and she has been seen on major national talk shows, including Oprah, Montel Williams, Sally Jessy Raphael, and Maury Povich. Her work has appeared in New Woman, Cosmopolitan, Woman's Day, Self, Parenting, Working Woman, and American Baby magazine. She lives with her two children, Zoe and Evan, in Minneapolis.

AND ONE FOR GOOD LUCK: If he doesn't say "I love you" enough
AFTERWORD

GOR001627177
He Just Doesn't Get It: Simple Solutions to the Most Common Relationship Problems by Ellen Sue Stern
Ellen Sue Stern
Used - Very Good
Paperback
Simon & Schuster
1998-12-01
256
0671525158
9780671525156
N/A
Book picture is for illustrative purposes only, actual binding, cover or edition may vary.
This is a used book - there is no escaping the fact it has been read by someone else and it will show signs of wear and previous use. Overall we expect it to be in very good condition, but if you are not entirely satisfied please get in touch with us.