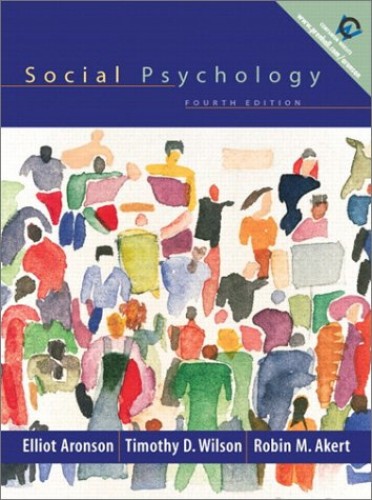 Used Price
$46.99
inc. GST
Free Shipping in Australia
Intended for an undergraduate introductory level course in social psychology, this text uses a story-telling approach to convey the science of social psychology. Its aim is to help students understand the whole context of the field, and how all of this impacts their everyday lives.
Reviews:
Trustpilot
Very Good Good

For an undergraduate introductory level course in social psychology.

More engaging, integrative, and scientific that any other text of its kind, this #1-rated text on social psychology uses a story-telling approach to convey the science of social psychology in a fascinating, memorable, and completely entertaining manner. Successfully capturing the excitement of social psychology, it helps students understand the whole context of the field-how theories inspire research, why research is performed as it is, and how further research triggers new avenues of study-and how all of this impacts their everyday lives. Vignettes and "mini" stories within every chapter include detailed descriptions of classic and modern experiments, and describe an example of a real-life phenomenon designed specifically to pique students' interest.

Elliot Aronson graduated from Brandeis University (where he worked with Abraham Maslow) and received his Ph.D. from Stanford University, working under the guidance of Leon Festinger. He has done pioneering research in the areas of social influence, persuasion, prejudice reduction, and AIDS prevention. Aronson has written or edited eighteen books, including The Social Animal, The Handbook of Social Psychology, Age of Propaganda, The Jigsaw Classroom, Methods of Research in Social Psychology, and Nobody Left to Hate. He is among the world's most distinguished social psychologists. He is the only person in the 107-year history of the American Psychological Association to have earned all three of its major academic awards: for Distinguished Teaching, for Distinguished Research, and for Distinguished Writing. He has served as president of the Society of Personality and Social Psychology and president of the Western Psychological Association. In 1992, he was elected a Fellow of the American Academy of Arts and Sciences. He is currently professor emeritus at the University of California at Santa Cruz and a visiting professor at Stanford University.

Tim Wilson did his undergraduate work at Williams College and Hampshire College and received his Ph.D. from the University of Michigan. Currently a professor of psychology at the University of Virginia, he has published numerous articles in the areas of introspection, attitude change, self-knowledge, and affective forecasting. His research has received the support of the National Science Foundation and the National Institute for Mental Health. He has been associate editor of the Journal of Personality and Social Psychology and a member of the Social and Groups Processes Review Committee at the National Institute of Mental Health. He has been elected twice to the Executive Board of the Society for Experimental Social Psychology and is a Fellow in the American Psychological Society. Wilson has taught the Introduction to Social Psychology course at the University o f Virginia for more than twenty years. He was recently awarded an All University Outstanding Teaching Award.


2. Methodology: How Social Psychologists Do Research.


3. Social Cognition: How We Think about the Social World.


4. Social Perception: How We Come to Understand Other People.


5. Self-Knowledge: How We Come to Understand Ourselves.


6. Self-Justification and the Need to Maintain Self-Esteem.


11. Prosocial Behavior: Why Do People Help?


12. Aggression: Why We Hurt Other People.

GOR002595472
Social Psychology by Elliot Aronson
Elliot Aronson
Used - Very Good
Hardback
Pearson Education (US)
2001-06-21
677
0130288640
9780130288646
N/A
Book picture is for illustrative purposes only, actual binding, cover or edition may vary.
This is a used book - there is no escaping the fact it has been read by someone else and it will show signs of wear and previous use. Overall we expect it to be in very good condition, but if you are not entirely satisfied please get in touch with us.