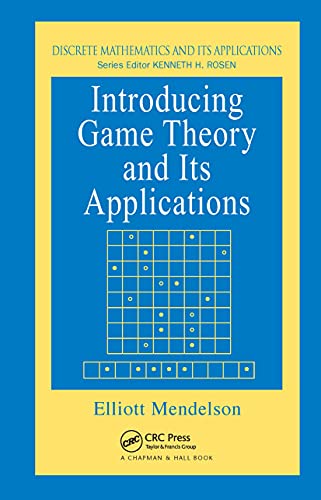 Used Price
$96.99
inc. GST
Free Shipping in Australia
Presents an easy-to-read introduction to the basic ideas and techniques of game theory. This book covers combinatorial games. It also focuses on two-person zero-sum games and their solution. It presents the simplex method, based on linear programming, for solving these games and develops the required background in linear programming.
Very Good

The mathematical study of games is an intriguing endeavor with implications and applications that reach far beyond tic-tac-toe, chess, and poker to economics, business, and even biology and politics. Most texts on the subject, however, are written at the graduate level for those with strong mathematics, economics, or business backgrounds.

In a clear and refreshing departure from this trend, Introducing Game Theory and its Applications presents an easy-to-read introduction to the basic ideas and techniques of game theory. After a brief introduction, the author begins with a chapter devoted to combinatorial games--a topic neglected or treated minimally in most other texts. The focus then shifts to two-person zero-sum games and their solution. Here the author presents the simplex method, based on linear programming, for solving these games and develops within his presentation the required background in linear programming. The final chapter presents some of the fundamental ideas and tools of non-zero-sum games and games with more than two players, including an introduction to cooperative game theory.

This book will not only satisfy the curiosity of those whose interest in the subject was piqued by the 1994 Nobel Prize awarded to Harsanyi, Nash, and Selten. It also prepares its readers for more advanced study of game theory's applications in economics, business, and the physical, biological, and social sciences.

THE SIMPLEX METHOD. THE FUNDAMENTAL THEOREM OF DUALITY. SOLUTION OF TWO-PERSON ZERO-SUM GAMES.

GOR009822579
Introducing Game Theory and its Applications by Elliott Mendelson (Queens College, Flushing, New York, USA)
Elliott Mendelson (Queens College, Flushing, New York, USA)
Advances in Applied Mathematics
Used - Very Good
Hardback
Taylor & Francis Inc
2004-07-03
272
1584883006
9781584883005
N/A
Book picture is for illustrative purposes only, actual binding, cover or edition may vary.
This is a used book - there is no escaping the fact it has been read by someone else and it will show signs of wear and previous use. Overall we expect it to be in very good condition, but if you are not entirely satisfied please get in touch with us.