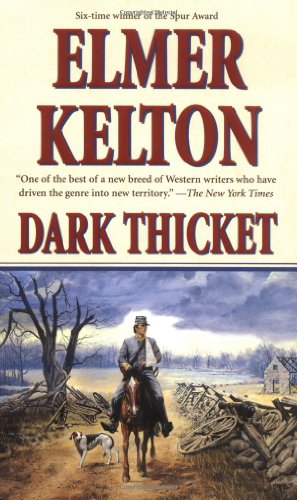 Out of Stock
$64.99
inc. GST
Returning home to Texas near the close of the Civil War, Confederate soldier Owen Danforth finds his state torn by its own near civil war as the supporters of Sam Houston and the murderous Home Guards struggle for power.
Very Good
Only 0 left

One of America's greatest Western storytellers, Elmer Kelton has been voted the greatest Western writers of all time by the Western Writers of America." Dark Thicket "is one of his many classic tales of the history of his home state of Texas.
Young Owen Danforth rides home to Texas as a wounded Confederate soldier, at a time when his home state is as savagely divided as his nation. As a grievously wounded America staggers toward the inevitable end of the Civil War, secessionist "home guards" and staunch Union loyalists fight their own bloody battles on a more local scale. For Owen, sick to death of fighting and yearning for peace and recuperation, his homecoming is bittersweet. And when his blood ties force him to choose a side in an unwinnable conflict, Owen begins to wonder if he will ever see peace in Texas again.

"One of the best of a new breed of Western writers who have driven the genre into new territory."--"The New York Times"

"The greatest Western writer of all time."--"Western Writers of America, Inc".

"Recently voted the 'greatest Western writer of all time' by the Western Writers of America, Kelton creates characters more complex than L'Amour's."--"Kirkus Reviews"

Elmer Kelton, author of more than forty novels, grew up on a ranch near Crane, Texas, and earned a journalism degree from the University of Texas. His first novel, "Hot Iron," was published in 1956. For forty-two years he had a parallel career in agricultural journalism.
Among his awards have been seven Spurs from Western Writers of America and four Western Heritage awards from the National Cowboy Hall of Fame. Among his best-known works have been "The Time It Never Rained "and" The Good Old Boys," the latter made into a television film starring Tommy Lee Jones.
He served in the infantry in World War II. He and his wife, Ann, a native of Austria, live in San Angelo, Texas. They have three children, four grandchildren and five great-grandchildren.

GOR010262194
Dark Thicket by Elmer Kelton
Elmer Kelton
Used - Very Good
Paperback
St Martin's Press
2001-08-02
183
0812565223
9780812565225
N/A
Book picture is for illustrative purposes only, actual binding, cover or edition may vary.
This is a used book - there is no escaping the fact it has been read by someone else and it will show signs of wear and previous use. Overall we expect it to be in very good condition, but if you are not entirely satisfied please get in touch with us.