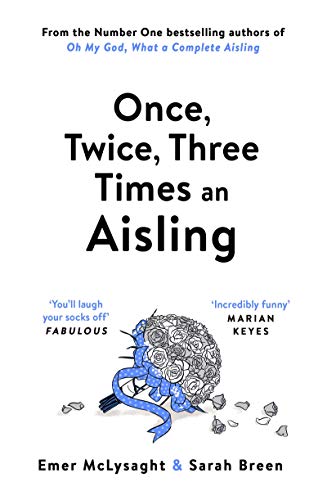 Once, Twice, Three Times an Aisling by Emer McLysaght

Once, Twice, Three Times an Aisling by Emer McLysaght

The hilarious new romantic comedy Once, Twice, Three times an Aisling - the third book in the No. 1 bestselling Aisling series.
__________

Aisling is thirty, flirty and frazzled.

But - just when she should finally be feeling all grown-up - she's floundering.

Because when you're recovering from a broken heart as well as struggling to keep your cafe as sizzling as your award-winning sausages, it's hard to feel you've really made it as an adult.

Which is just the moment for the unexpected to strike and complicate everything.

Now is not the time for a delicious new man to show up, her best friend to demand the hen do of the century and a surprise celebrity appearance.

But Aisling, never one to worry about having too much on her plate, rolls up her sleeves: she's got this.

Until she discovers that being a proper grown-up means you can't do everything.

Sometimes you will let someone down.

But will it be those she loves, or herself?

'The Irish answer to Bridget Jones . . . will have you laughing one minute and crying the next' OK

'Plenty of acutely observed running jokes . . . The female relationships are as charmingly drawn as ever . . . It's not difficult to see why Aisling has become such a phenomenon in Irish publishing' Sunday Times

Praise for Oh My God, What a Complete Aisling and The Importance of Being Aisling

'Hailed as the Irish answer to Bridget Jones . . . stuffed with laughs' Daily Mail

'A joyful, emotional, heartfelt romp of a novel' Heat

Plenty of acutely observed running jokes . . . The female relationships are as charmingly drawn as ever . . . It's not difficult to see why Aisling has become such a phenomenon in Irish publishing * Sunday Times *
The Irish answer to Bridget Jones . . . will have you laughing one minute and crying the next. Emer McLysaght and Sarah Breen's effortlessly clever writing with heaps of humour, sharp observations and witty dialogue is being described as this year's funniest novel to date. Could this be the best Aisling book so far? * OK *
Our favourite resident of Ballygobbard is back in this third instalment of my go-get-happy series * Red *
Prim and proper Aisling is back in this third hilarious instalment * Hello! *
Praise for Oh My God, What a Complete Aisling and The Importance of Being Aisling * - *
There aren't enough words for how much I love it. It's feicin' HILAIRE and very touching
Aisling and the novel have a great big thumping heart * Sunday Times *
The year's funniest book to date * Hello *
The Irish answer to Bridget Jones . . . it's stuffed with laughs * Daily Mail *
Funny, on-the-nose accounts of a certain kind of Irish girl we all know * The Irish World Newspaper *
Will have you laughing out loud one minute and crying the next. This is a joyful, emotional, heartfelt, hilarious romp of a novel * Heat *
Her voice leaps off the page . . . it's this depth of character and eye for detail that makes comparisons with Helen Fielding's Bridget Jones series spot-on * Independent *
Should come with a health warning. Ten pages in my face hurts from grinning * Sunday Independent *
Funny and human, Aisling is already queen of Irish comic fiction. Long may she reign * i *
Hilariously funny, but often very moving too. Aisling is the real Voice of Ireland
One of my fave novels of 2017. It really does remind me of Marian Keyes
Will have you shedding a tear as well as laughing your socks off * Fabulous *
Humour, warmth and quintessential Irishness. Much hilarity, many tears and an ending that is incredibly uplifting * Woman & Home, Books of the Year *

Emer McLysaght (Author)
Emer McLysaght is the former editor of The Daily Edge and has worked extensively in journalism and radio.

Sarah Breen (Author)
Sarah Breen is a journalist whose work has appeared in Stellar, Image, U, the Irish Independent and The Gloss.

GOR010081991
Once, Twice, Three Times an Aisling by Emer McLysaght
Emer McLysaght
The Aisling Series
Used - Very Good
Paperback
Penguin Books Ltd
2019-09-19
416
024136177X
9780241361771
N/A
Book picture is for illustrative purposes only, actual binding, cover or edition may vary.
This is a used book - there is no escaping the fact it has been read by someone else and it will show signs of wear and previous use. Overall we expect it to be in very good condition, but if you are not entirely satisfied please get in touch with us
Trustpilot