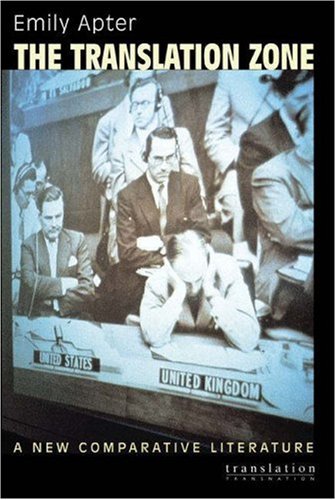 The Translation Zone
by Emily Apter

The Translation Zone: A New Comparative Literature by Emily Apter

Translation, before 9/11, was deemed primarily an instrument of international relations, business, education, and culture. Today it seems, more than ever, a matter of war and peace. In "The Translation Zone", Emily Apter argues that the field of translation studies, habitually confined to a framework of linguistic fidelity to an original, is ripe for expansion as the basis for a new comparative literature. Organized around a series of propositions that range from the idea that nothing is translatable to the idea that everything is translatable, "The Translation Zone" examines the vital role of translation studies in the "invention" of comparative literature as a discipline.Apter emphasizes "language wars" (including the role of mistranslation in the art of war), linguistic incommensurability in translation studies, the tension between textual and cultural translation, the role of translation in shaping a global literary canon, the resistance to Anglophone dominance, and the impact of translation technologies on the very notion of how translation is defined. The book speaks to a range of disciplines and spans the globe. Ultimately, "The Translation Zone" maintains that a new comparative literature must take stock of the political impact of translation technologies on the definition of foreign or symbolic languages in the humanities, while recognizing the complexity of language politics in a world at once more monolingual and more multilingual.

"This is a terrific book and a great pleasure to read. At once creative and provocative, Apter's witty analyses of multilingual matters in literature makes a major contribution to a range of disciplines from translation studies, comparative literature and linguistics, postcolonial studies, to mainstream literary studies in French and English. What is so unusual is the impressive breadth and range of Apter's reading in literatures across the globe. This is a book that will make readers want to rethink the limits of their own disciplines, and retranslate the concepts that they employ."-Robert J. C. Young, Oxford University, author of Postcolonialism: An Historical Introduction
"The Translation Zone offers a richly detailed history of Comparative Literature, a field volatile from the first, looking to contrary horizons, and never more so than at the present moment. Emily Apter explores the roads taken and not taken in the past, linking these to the new, cross-fertilized languages that constitute and energize the field in the future."-Wai Chee Dimock, author of Through Other Continents: American Literature Across Deep

Emily Apter is Professor of French and Comparative Literature at New York University. Her most recent book is "Continental Drift: From National Characters to Virtual Subjects".

GOR010107523
The Translation Zone: A New Comparative Literature by Emily Apter
Emily Apter
Translation/Transnation
Used - Very Good
Hardback
Princeton University Press
2005-12-05
296
0691049963
9780691049960
N/A
Book picture is for illustrative purposes only, actual binding, cover or edition may vary.
This is a used book - there is no escaping the fact it has been read by someone else and it will show signs of wear and previous use. Overall we expect it to be in very good condition, but if you are not entirely satisfied please get in touch with us.