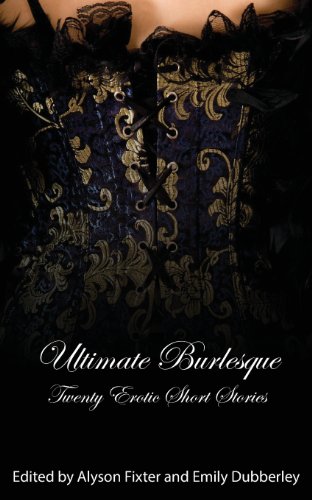 A boyishly figured stage hand becomes entranced when new act Kathy Au Lait comes to the theatre where she works. When she catches Kathy and her manager in a secret tryst she has no idea of the world she is about to enter into.

When husband and wife Sam and Chloe decide to experiment with exhibitionism an internet friend steps in to provide a very encouraging audience for their sexual show.

When a university student gets a job as a maid for some extra cash she never imagined the satisfaction she'd get from her work, or the strange fascination she finds with the artist who paints a mystery dancer and leaves it for her to find every week.

Just Another Night In Paradise by Lauren Wissot

What can two bored people do for fun in the city? What about a trip to the club to watch the visiting male burlesque dancers to see just what kind of trouble they can get into.

The Duck, The Mouse And The Bride by Daphne Bing

When a charitable burlesque dancer eyes up a new man, she has no idea just how wild her night will get. Making it back to his place to find he has two friends who want to get involved will only make her night better.

Out Of Bed On The Right Side by Olivia Darling

A loving woman reminsices about the perfect birthday present she gave her lover; a tie. But how can a run of the mill tie be so perfect?

Helena's last ditch attempt to save her marriage ends abruptly when her prim and proper husband decries her carefully choreographed dance for him. But someone is waiting in the wings to pick up the pieces.

Calippa The Stripper by Elizabeth Black

It's the 1920's and the League of Decency has its eye fixed firmly on Calippa the Stripper. Her hot new act has them all riled up as she finds a loophole in their nudity laws, but can Calippa resist the pleasure of her on-stage vibrartor long enough to not get arrested for it?

China Doll Cherry never tires of the behind the scenes fun of the bulresque life. Every perfomance spurs her on to new highs and tonight will be no different.

Oh, My Mother Was Frightened by A Shotgun, They Say by Richard Bardsley

Tia is a little uncomfortable showing potential buyers around her house without her husband Bobby there to ensure her safety, but when she tasers a burglar who turns out to be Bobby coming home early, she gives their sex life a real buzz.

The Performing Breasts by Marcella Perks

A dancer gives up her life of glitz and glamour to have a baby with her loving husband but is unhappy with her body after the baby. Whatever could her husband do to help her re-connect with her inner beauty?

Mrs Curtis decides to take an exercise class, which can only pay off when she puts on a show for Mr Curtis, who can scarcely believe his luck.

Laura The Laugher by Jeremy Edwards

The Rebirth Of Venus by Christiana Spens

Young wannabe artist Edward finds a new muse in the beautiful Victoria, singer at a burlesque club. Their passionate lovemaking will give him just the inspiration he needs to paint a real masterpiece.

Madame Satie's Hot Kookie Bazoukie Crew is made up of women known for their engrossing breasts. Ava longs to be a part of their troupe and has just the ticket she needs. Antoine, Madame Satie's lapdog, can not get enough of her. Are they a match or will their show be a bust?

Catch Me If You Can by Nikki Magennis

A wanton dancer performs her act dressed as a beguiling mermaid who lures sailors to the depths of the ocean. But with the act over and the punters gone, one would-be sailor remains for a chance at his this intriguing mermaid.

The Price Of Freedom by Carmel Lockyer

World War Two has just ended and the girls of The Full Moon Club want to stage an unforgettable show to celebrate. But Sylvia needs a pair of stockings to make her costume complete and wise guy Teddy is the only man who can provide them. Can she convince him to donate to the show?

An older man with a penchant for naughtiness enchants Sylvie, the buxom burlesque dancer at his favourite new haunt. Sylvie's innocence spurs him to challenge her to perform for her audience with a very special kind of prop.

All Eyes Upon Her by Donna George Storey

New boyfriend Nick is getting the treat `em mean, keep `em kean treatment from Cara. All that looking with no touching has riled the both up so when Cara is inspired by a museum exhibit to dance for him, the night is sure to end only in passion.

The Rise And Fall Of The Burlesque Empire by Maxim Jakubowski

A time traveller follows a woman from the beginning of her career as a new dancer to something far darker.

Kiss Of The Spiderwoman by Elizabeth K. Payne

When theatre manager Tyler sneaks his troublesome girlfriend into the closed theatre for a treat neither of them realise that performer Magda is already there, and only too willing to join in.

A highly sought after personal assistant gets a gig she didn't bargain for when she's asked to work for a famous burlesque star headlining a charity show. Despite never having looked at a woman twice, there is something so sensual about Mignon that she just can't resist.

Bored circus performer Roxy is tired of the audience gawking as she takes her clothes off for their pleasure. She decides to reinvent herself as a truly classy act, bringing glitz and glamour to the circus, as well as her bed.

The Finest Legs To Grace The Boards by Katie Crawley

Gracie Garter steps up to take the top billing at the local burlesque night and is rewarded by meeting the mysterious owner of the club.

A first time dancer fails at her routine, but enjoys her punishment and later lesson, which comes from a very unexpected source.

The Intimate Diary Of Martha Rae by Mark Farley

When Martha Rae's grandmother falls ill, she is duty bound to go out to the coast to take care of the woman. Having little money, Martha decides the best way to make some easy cash is to start dancing (and more) in the local bar. Which is where she meets Lydia...

The Stage Is Her Slave by Wanda Von Mittens

Mistress Devora comes to bustling French town to take over a failing theatre, but she needs help to do it. At her right hand she wants a lowly shoe-shiner picked from the street outside the theatre. But why?

If The Slipper Fits by Mat Fraser

A New Yorker takes a trip to the Slipper Room Burlesque Bar to get acquainted with his surroundings. There he meets the DJ Camille, and two of her very obliging friends when they corner him in the bathroom for some very kinky sex.

The Princess And The Prophet, or, The Comedy of Salome by Claire Wordley

Bellydancing princess Salome has grown weary of life. Even her seven handmaidens cannot cure her of her boredom and lust. But the King's prisoner, a blasphemous prophet, holds an intrigue for her that she can not, and will not, deny.

Authors include Katie Fforde, Maxim Jakabowski, Portia da Costa, Nikki Magennis, Emily Dubberley, Lauren Wissot and Donna George Storey.
GOR001379058
9781906373634
1906373639
Ultimate Burlesque by Emily Dubberley
Emily Dubberley
Ultimate Xcite
Used - Very Good
Paperback
Headline Publishing Group
20130523
258
N/A
Book picture is for illustrative purposes only, actual binding, cover or edition may vary.
This is a used book - there is no escaping the fact it has been read by someone else and it will show signs of wear and previous use. Overall we expect it to be in very good condition, but if you are not entirely satisfied please get in touch with us
Trustpilot