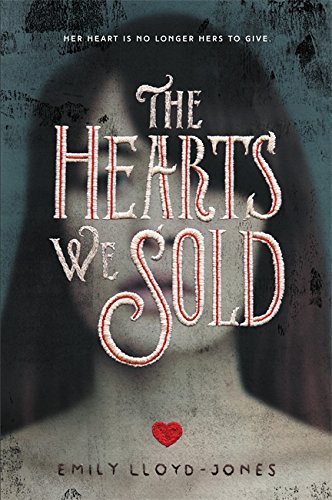 The Hearts We Sold
by Emily Lloyd-Jones

The Hearts We Sold Summary

The Hearts We Sold by Emily Lloyd-Jones

Dee Moreno is out of options. Her home life sucks (to put it mildly), and she's about to get booted from her boarding school--the only place she's ever felt free--for lack of funds. But this is a world where demons exist, and the demons are there to make deals: one human body part in exchange for one wish come true.

When Dee finally summons the courage to make a deal with one of these devils, she finds it may be more than she bargained for. The demon she approaches quickly informs her that he doesn't trade in the usual appendages, he's only interested in her heart. He'll put her body in a kind of stasis for two years, and she'll become part of his crew of "heartless"--teen soldiers sent to the demons' home world to fight their enemies. All of the heartless have their reasons for making this deal, but it begs the question: what are you willing to give up to achieve your heart's desire?

A Faustian blend of sci-fi and paranormal horror, The Hearts We Sold is thrilling adventure with a romantic twist that will steal readers' hearts and then break them

The Hearts We Sold Reviews

Praise for Illusive and Deceptive *"Boasting a complex plot, heart-stopping bursts of action, and questions regarding human nature, Lloyd-Jones' thought-provoking, multifaceted narrative neatly sidesteps categorization as just another superhero or dystopian novel--though fans of both will be drawn to the material and be pleasantly surprised. An impressive debut guaranteed to disappear from the shelves before your very eyes."
--Booklist (starred review)
"[Entertaining] and unpredictable. An action-packed adventure with a charming criminal crew."
--Kirkus
"Lloyd-Jones deftly weaves several plot strands, using flashbacks to impart background information. Snappy dialogue and harrowing action scenes move the twisting plot along and maintain suspense throughout...A must-read for fans of intrigue and superpowered villains."
--SLJ
Praise for The Hearts We Sold * "Beautifully written and elegantly characterized, this is a thoughtful, melancholy tale of love and redemption, magic and choice. Lloyd-Jones tracks Dee's Faustian journey without ever falling out of step, and the story itself will ensnare readers as surely as any bargain."--Booklist (starred review)
"One of those unassuming reads that quietly sneaks up on you--and before you know it you've been blindsided by how awesome it is... The message in the philosophical prose is understated, but powerful, as is the surprise ending. With wonderfully developed characters, an engaging storyline and a romance that will steal readers' hearts, The Hearts We Sold is a story that's easy to love."--Romantic Times
"With its lush, Lovecraftian worldbuilding and a heroine as tough as she is damaged, The Hearts We Sold sucked me in and held me captive. I finished it in one sitting!"--Gretchen McNeil, author of Ten and the Don't Get Mad series
"Lloyd-Jones's take on the Faustian myth will keep readers engaged. A broad array of well-developed characters will intrigue readers as the plot advances and curves. Offers character depth and diversity often lacking in the fantasy genre."--SLJ
"The slowly revealed lore of the demons coupled with Dee's adventures make for a whirlwind of a page-turner. Readers will devour this romantic, Faustian fable. A dark fantasy brimming with passion and peril."--Kirkus Reviews
"A completely original story that shatters the boundaries of YA fiction. Magic, mystery, and intrigue, paired with Jones's devilish story-telling ability, will bind readers to The Hearts We Sold until the final explosive ending."--Lindsay Cummings, #1 New York Times bestselling author of Zenith and The Murder Complex
"An inventive, heart-wrenching thrill ride."--Kim Liggett, author of Blood and Salt
"The characters are spunky and compassionate, and teen readers will love the storyline."--School Library Connection

Emily Lloyd-Jones grew up on a vineyard in rural Oregon, where she played in evergreen forests and learned to fear sheep. After graduating from Western Oregon University with an English degree, she enrolled in the publishing program at Rosemont College just outside of Philadelphia. She currently resides in Northern California, working in a bookstore by day and writing by night.

GOR009888985
The Hearts We Sold by Emily Lloyd-Jones
Emily Lloyd-Jones
Used - Very Good
Hardback
Little, Brown & Company
2017-08-08
400
0316314595
9780316314596
N/A
Book picture is for illustrative purposes only, actual binding, cover or edition may vary.
This is a used book - there is no escaping the fact it has been read by someone else and it will show signs of wear and previous use. Overall we expect it to be in very good condition, but if you are not entirely satisfied please get in touch with us.