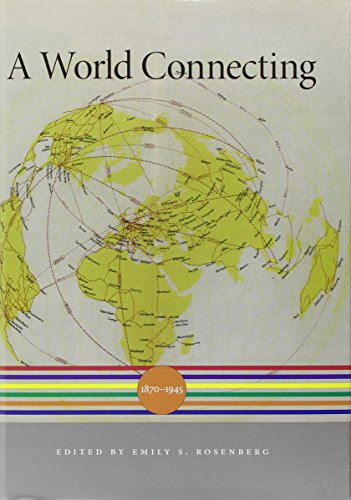 Used Price
$90.99
inc. GST
Free Shipping in Australia
Between 1870 and 1945, advances in communication and transportation simultaneously expanded and shrank the world. In five interpretive essays, A World Connecting goes beyond nations, empires, and world wars to capture the era's defining feature: the profound and disruptive shift toward an ever more rapidly integrating world.
Very Good

Between 1870 and 1945, advances in communication and transportation simultaneously expanded and shrank the world. New technologies erased distance and accelerated the global exchange of people, products, and ideas on an unprecedented scale. A World Connecting focuses on an era when growing global interconnectedness inspired new ambitions but also stoked anxieties and rivalries that would erupt in two world wars-the most destructive conflicts in human history. In five interpretive essays, distinguished historians Emily S. Rosenberg, Charles S. Maier, Tony Ballantyne, Antoinette Burton, Dirk Hoerder, Steven C. Topik, and Allen Wells illuminate the tensions that emerged from intensifying interconnectedness and attempts to control and shape the effects of sweeping change. Each essay provides an overview of a particular theme: modern state-building; imperial encounters; migration; commodity chains; and transnational social and cultural networks. With the emergence of modern statehood and the fluctuating fate of empires came efforts to define and police territorial borders. As people, products, capital, technologies, and affiliations flowed across uneasily bounded spaces, the world both came together and fell apart in unexpected, often horrifying, and sometimes liberating ways. A World Connecting goes beyond nations, empires, and world wars to capture the era's defining feature: the profound and disruptive shift toward an ever more rapidly integrating world.

A World Connecting should be of interest to American specialists precisely because of the rich empirical data marshaled, the fruitful hypotheses embedded in the arguments, and the myriad of scholarly works cited and included in the bibliography. This book should become a standard reference tool not only for global history, but also for supplying the wider contexts for conceptualizing American history from a transnational angle... [This] is a very large book of over a thousand pages, and each of the five sections could well command a detailed review in itself. In many ways, the individual chapters qualify as tour-de-force achievements in the agendas they have set. Not only is the material handled in a magisterial fashion, but arresting interpretations also appear at almost every turn. Historians of specific periods of national history like the American Gilded Age will profit from consulting this work.-- (03/01/2013)
Each of its five chapters draws on a massive range and quantity of source material. Each manages not only to synthesize this material, but also to make fresh arguments about it. Taken together, the chapters provide a broad picture of the way certain sorts of global connections changed between 1870 and 1945...In sum, the contributions bring together a remarkable body of insights about global connections and networks.
-- (10/07/2013)

GOR006926518
A World Connecting: 1870-1945 by Emily S. Rosenberg
Emily S. Rosenberg
A History of the World
Used - Very Good
Hardback
Harvard University Press
2012-11-06
1168
0674047214
9780674047211
N/A
Book picture is for illustrative purposes only, actual binding, cover or edition may vary.
This is a used book - there is no escaping the fact it has been read by someone else and it will show signs of wear and previous use. Overall we expect it to be in very good condition, but if you are not entirely satisfied please get in touch with us.