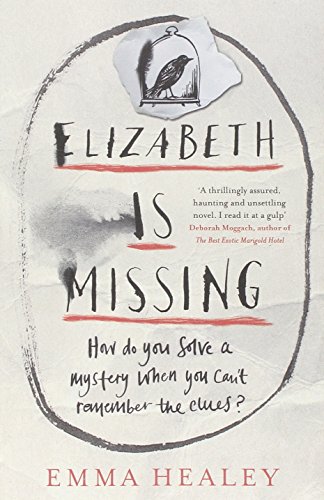 Elizabeth is Missing
by Emma Healey

Elizabeth is Missing by Emma Healey

'Elizabeth is missing', reads the note in Maud's pocket in her own handwriting.

Lately, Maud's been getting forgetful. She keeps buying peach slices when she has a cupboard full, forgets to drink the cups of tea she's made and writes notes to remind herself of things. But Maud is determined to discover what has happened to her friend, Elizabeth, and what it has to do with the unsolved disappearance of her sister Sukey, years back, just after the war.

A fast-paced mystery with a wonderful leading character: Maud will make you laugh and cry, but she certainly won't be forgotten.

The novel is both a gripping detective yarn and a haunting depiction of mental illness, but also more poignant and blackly comic than you might expect from that description... perhaps Healey's greatest achievement is the flawless voice she creates for Maud. * The Observer *
A compelling mystery that capture the experience of Maud, a highly memorable elderly woman losing her memory * Sunday Express *
A thrillingly assured, haunting and unsettling novel, I read it at a gulp -- Deborah Moggach
One of those semi-mythical beasts, the book you cannot put down -- Jonathan Coe
Already being tipped for literary stardom. At the London Book Fair last April, nine publishers fought for her debut, Elizabeth is Missing... a tale of dementia, its TV rights have already been sold * Evening Standard's Fourteen in 2014 *
Memory - or the lack of it - continues to be a big theme in fiction. The manuscript of this debut mystery narrated by an 81 year old who can't quite remember what she's investigating created a buzz at the London book fair in 2013 * Guardian's 2014 Books *
Elizabeth is Missing will stir and shake you: an investigation into a seventy-year-old crime, through the eyes of the most likeably unreliable of narrators. But the real mystery at its compassionate core is the fragmentation of the human mind. -- Emma Donoghue, award-winning author of Room

Emma Healey, a former bookseller, grew up in London where she went to art college and completed her first degree in bookbinding. She then worked for two libraries, two bookshops, two art galleries and two universities, and was busily pursuing a career in the art world before writing overtook everything. She moved to Norwich in 2010 to study for the MA in Creative Writing at UEA and never moved back again. Elizabeth is Missing, her first novel, was a Sunday Times Bestseller, won the Costa First Novel Award 2014 and was shortlisted for the National Book Awards Popular Fiction Book of the Year.

GOR006219840
Elizabeth is Missing by Emma Healey
Emma Healey
Used - Very Good
Paperback
Penguin Books Ltd
2014-06-05
288
0241003512
9780241003510
Short-listed for Costa First Novel Award 2014
Book picture is for illustrative purposes only, actual binding, cover or edition may vary.
This is a used book - there is no escaping the fact it has been read by someone else and it will show signs of wear and previous use. Overall we expect it to be in very good condition, but if you are not entirely satisfied please get in touch with us.