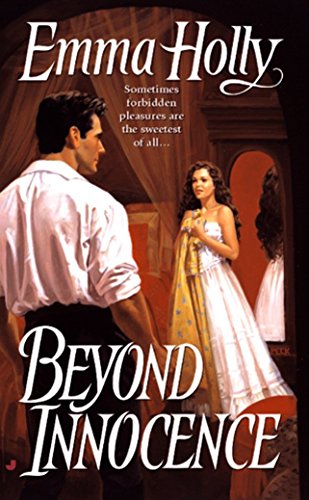 Beyond Innocence
by Emma Holly

Used Price
$11.99
inc. GST
Free Shipping in Australia
Arriving in London after her father's death, Florence Fairleigh looks for a husband, and finds one through Edward Burbrooke, who thinks marriage is the only way to save his brother, Freddie, and the family from scandalous ruin. Florence and Freddie make a perfect pair--until Edward realizes he has feelings for Florence.
Reviews:
Trustpilot
Very Good

Beyond Innocence by Emma Holly

Emma Holly turns up the heat in this sinfully sensuous story of a family plagued by scandal--and a shy young woman who discovers a passion beyond her wildest dreams...

When her beloved father passes away, Florence Fairleigh finds herself alone in the world. All she wants is a man who will treat her kindly and support her financially--and she's come to London to find him...

Edward Burbrooke thinks marriage is the only way to save his brother Freddie--and their family--from scandalous ruin. As head of the family, Edward has vowed to find Freddie a bride--and fast...

Thrown together by Edward, Florence and Freddie make a perfect pair--until Edward realizes he has feelings for his brother's betrothed. The sight of her nubile young body makes his blood burn with lust. The sound of her voice makes his heart warm with love. And the sweet taste of her kiss makes him wonder if he isn't making a terrible mistake....

Emma Holly lives in Minnesota where the winters are long and people will use any excuse to warm up. According to Emma, humanity's best inventions are hot showers, the printing press, coffee, chocolate, and bicycle shorts for men. She can be reached at emmah@wavetech.net or P.O. Box 2591, Minneapolis, MN 55402-0591.

GOR002892254
Beyond Innocence by Emma Holly
Emma Holly
Used - Very Good
Paperback
Penguin Putnam Inc
2001-07-01
304
0515130990
9780515130997
N/A
Book picture is for illustrative purposes only, actual binding, cover or edition may vary.
This is a used book - there is no escaping the fact it has been read by someone else and it will show signs of wear and previous use. Overall we expect it to be in very good condition, but if you are not entirely satisfied please get in touch with us.