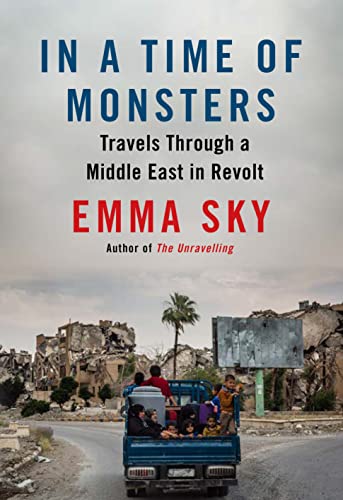 In A Time Of Monsters
by Emma Sky

Used Price
$28.49
inc. GST
Free Shipping in Australia
The story of a British woman travelling through a Middle East in revolt; it reveals how the Iraq war and the Arab Spring led to ISIS and the Syrian civil war, and caused the flood of refugees into Europe, contributing to the rise of populism in the West.
Like New

In A Time Of Monsters Summary

In A Time Of Monsters: Travels Through a Middle East in Revolt by Emma Sky

Returning to the UK in September 2010 after serving in Iraq as the political adviser to the top American general, Emma Sky felt no sense of homecoming. She soon found herself back in the Middle East travelling through a region in revolt.

In A Time of Monsters bears witness to the demands of young people for dignity and justice during the Arab Spring; the inability of sclerotic regimes to reform; the descent of Syria into civil war; the rise of the Islamic State; and the flight of refugees to Europe. With deep empathy for its people and an extensive understanding of the Middle East, Sky makes a complex region more comprehensible.

A great storyteller and observational writer, Sky also reveals the ties that bind the Middle East to the West and how blowback from our interventions in the region contributed to the British vote to leave the European Union and to the election of Donald Trump as president of the United States.

In A Time Of Monsters Reviews

A fascinating account by someone who both knows the region and cares. -- Christina Lamb * Sunday Times *
Sky's clear, unadorned and unpretentious style is a reflection of her intellectual and emotional commitment to a region that she evidently loves and understands... Accounts of the complexities of the parts of the region she knows best are riveting. -- Jason Burke * Guardian *

Emma Sky is a Senior Fellow at Yale University's Jackson Institute. She worked in the Middle East for twenty years and was made an Officer of the Order of the British Empire for services in Iraq. She lives in New Haven, Connecticut.

0: Prologue: What had it all been for? 1: Hold your head up, you're an Egyptian! 2: Degage! 3: 'Assad - or we burn the country' 4: They are all thieves 5: Zero neighbours without problems 6: Better sixty years of tyranny than one night of anarchy 7: . to the hill of frankincense 8: We have no friends but the mountains 9: ... but surely we are brave, who take the Golden Road to Samarkand 10: The Islamic State: A caliphate in accordance with the prophetic method 11: What happens in the Middle East does not stay in the Middle East 12: And even though it all went wrong 13: Epilogue: The sun also rises

GOR009630730
In A Time Of Monsters: Travels Through a Middle East in Revolt by Emma Sky
Emma Sky
Used - Like New
Hardback
Atlantic Books
2019-02-07
320
1786495600
9781786495600
N/A
Book picture is for illustrative purposes only, actual binding, cover or edition may vary.
The book has been read, but looks new. The book cover has no visible wear, and the dust jacket is included if applicable. No missing or damaged pages, no tears, possible very minimal creasing, no underlining or highlighting of text, and no writing in the margins.