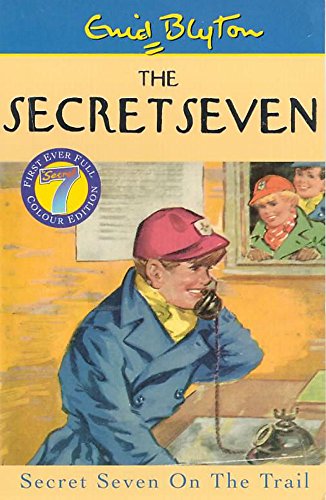 Secret Seven On The Trail
by Enid Blyton

Out of Stock
$14.49
inc. GST
A classic adventure story with timeless appeal - now in colour! Is something mysterious happening at Tigger's Barn? Peter thinks it's a hoax. Then Jack overhears an extraordinary conversation which lead the Seven on a trail of adventure!
Very Good
Only 0 left

Secret Seven On The Trail Summary

Secret Seven On The Trail: Book 4 by Enid Blyton

In book four, something mysterious is going on at Tigger's Barn, and the Secret Seven are intrigued. Peter thinks it's all just gossip, but Jack isn't so sure when he overhears a strange conversation.

Looks like the Seven are on the trail of another exciting adventure.

First published in 1952, this edition features the original text and artwork in full colour.

GOR005298920
Secret Seven On The Trail: Book 4 by Enid Blyton
Enid Blyton
Secret Seven
Used - Very Good
Paperback
Hachette Children's Group
2000-08-17
144
0340773081
9780340773086
N/A
Book picture is for illustrative purposes only, actual binding, cover or edition may vary.
This is a used book - there is no escaping the fact it has been read by someone else and it will show signs of wear and previous use. Overall we expect it to be in very good condition, but if you are not entirely satisfied please get in touch with us.