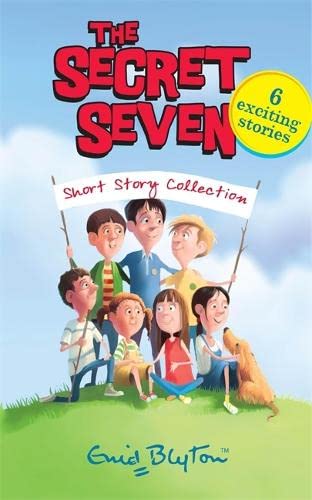 In Stock
$12.99
inc. GST
A delightful collection of 6 original short stories about the Secret Seven, packed with adventure and mystery.
Very Good Good
8 in stock

A secret store of stolen silver, a surprising view through a telescope, a shrill scream on a night out, a disappearing cash box, a dangerous accident and a trap for the Secret Seven!

Read all about the Secret Seven and their exciting adventures in this delightful unillustrated collection of classic short stories featuring the original text.

Enid Blyton's books have sold over 500 million copies and have been translated into other languages more often than any other children's author. She wrote over 700 books and about 2,000 short stories, including favourites such as The Famous Five,The Secret Seven, The Magic Faraway Tree, Malory Towers and Noddy. Born in London in 1897, Enid lived much of her life in Buckinghamshire and adored dogs, gardening and the countryside. She died in 1968 but remains one of the world's best-loved storytellers.

GOR001244210
Secret Seven Short Story Collection by Enid Blyton
Enid Blyton
Secret Seven Short Stories
Used - Very Good
Paperback
Hachette Children's Group
2007-08-16
160
0340944218
9780340944219
N/A
Book picture is for illustrative purposes only, actual binding, cover or edition may vary.
This is a used book - there is no escaping the fact it has been read by someone else and it will show signs of wear and previous use. Overall we expect it to be in very good condition, but if you are not entirely satisfied please get in touch with us.