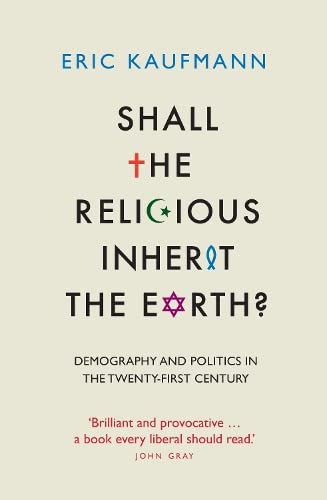 Shall the Religious Inherit the Earth?
by Eric Kaufmann

Used Price
$119,99
inc. GST
Free Shipping in Australia
Drawing on demographic research and considering questions of multiculturalism, nationalism and terrorism, this title examines the implications of the decline in liberal secularism as religious conservatism rises and what this means for the future of western modernity.
Very Good

Shall the Religious Inherit the Earth? Summary

Shall the Religious Inherit the Earth?: Demography and Politics in the Twenty-First Century by Eric Kaufmann

Dawkins and Hitchens have convinced many western intellectuals that secularism is the way forward. But most people don't read their books before deciding whether to be religious. Instead, they inherit their faith from their parents, who often innoculate them against the elegant arguments of secularists. And what no one has noticed is that far from declining, the religious are expanding their share of the population: in fact, the more religious people are, the more children they have. The cumulative effect of immigration from religious countries, and religious fertility will be to reverse the secularisation process in the West. Not only will the religious eventually triumph over the non-religious, but it is those who are the most extreme in their beliefs who have the largest families. Within Judaism, the Ultra-Orthodox may achieve majority status over their liberal counterparts by mid-century. Islamist Muslims have won the culture war in much of the Muslim world, and their success provides a glimpse of what awaits the Christian West and Israel. Based on a wealth of demographic research, considering questions of multiculturalism and terrorism, Kaufmann examines the implications of the decline in liberal secularism as religious conservatism rises - and what this means for the future of western modernity.

Shall the Religious Inherit the Earth? Reviews

With a suitably global sweep, [Kaufmann's] analysis takes in the history of US Christian movements, the radical disputes within Islam and the increasing ultra-orthodoxy spreading across Israel. He avoids falling into any nasty traps and this remains a provocative and well-informed addition to the debate. -- Robert Murphy * Metro *
Kaufmann is controversial, highly informative and thought provoking. A not-to-be-missed contribution to one of the most pressing and complex debates of modern time. -- Michal Boncza * Morning Star *
Authoritative and fascinating ... we must all hope that for all his research and brilliance, Eric Kaufmann joins the Bergers and Ehrlichs. * Literary Review *
sobering and controversial * Financial Times *

Eric Kaufmann is Professor of Politics at Birkbeck College, University of London. A visiting Fellow at the Kennedy School, Harvard, in 2008-9, he is the author of Shall the Religious Inherit the Earth (Profile 2010) and has written on religion and demography for Newsweek, Foreign Policy and Prospect, among others.

GOR003197889
Shall the Religious Inherit the Earth?: Demography and Politics in the Twenty-First Century by Eric Kaufmann
Eric Kaufmann
Used - Very Good
Paperback
Profile Books Ltd
2010-03-25
320
1846681448
9781846681448
N/A
Book picture is for illustrative purposes only, actual binding, cover or edition may vary.
This is a used book - there is no escaping the fact it has been read by someone else and it will show signs of wear and previous use. Overall we expect it to be in very good condition, but if you are not entirely satisfied please get in touch with us.