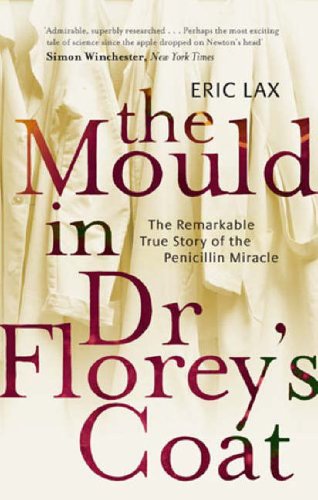 The Mould In Dr Florey's Coat
by Eric Lax

Out of Stock
$18.49
inc. GST
* Subtitled 'The Remarkable True Story of the Penicillin Miracle', this book is a wonderful combination of modern narrative history and popular science.
Very Good
Only 0 left

The Mould In Dr Florey's Coat: The Remarkable True Story of the Penicillin Miracle by Eric Lax

Many people know that in 1928 Alexander Fleming discovered penicillin's antibiotic potential while examining a stray mould that had bloomed in a dish of bacteria in his London laboratory. But few realise that Fleming worked only fitfully on penicillin until 1935, and that he is merely one character in the remarkable story of the antibiotic's development as a drug. The others are Howard Florey, Professor of Pathology at Oxford University, where he ran the Dunn School; the German Jewish emigre and biochemist Ernst Chain; and Norman Heatley, one of the few scientists in Britain capable of the micro-analysis of organic substances. It was these three men and their colleagues at the Dunn School who would battle a lack of money, a lack of resources and even each other to develop a drug that would change the world. It was these three men and their colleagues who would be almost forgotten. Why this happened, why it took fourteen years to develop penicillin, and how it was finally done, is a story of quirky individuals, missed opportunities, medical prejudice, brilliant science, shoestring research, wartime pressures and misplaced modesty.

Admirable, superbly researched ... Perhaps the most exciting tale of science since the apple dropped on Newton's head * Simon Winchester, NEW YORK TIMES *
Veteran journalist and author Lax takes a revealing look back at the time when world-altering science was done on a shoestring, bringing to brilliant life the story of the first great antibiotic ... Informative and thoroughly enjoyable science history * KIRKUS REVIEWS *
[Lax] tells the stories of these four remarkable scientists adroitly . . . and reinserts them into their rightful place in scientific history. * INDEPENDENT ON SUNDAY *
A fascinating story of serendipity, wounded egos and medical myths. * GUARDIAN *

Eric Lax is a biographer and magazine journalist (VANITY FAIR, ESQUIRE) who lives in Los Angeles with his wife and two sons.

GOR002190731
The Mould In Dr Florey's Coat: The Remarkable True Story of the Penicillin Miracle by Eric Lax
Eric Lax
Used - Very Good
Paperback
Little, Brown Book Group
2005-11-03
400
0349117683
9780349117683
N/A
Book picture is for illustrative purposes only, actual binding, cover or edition may vary.
This is a used book - there is no escaping the fact it has been read by someone else and it will show signs of wear and previous use. Overall we expect it to be in very good condition, but if you are not entirely satisfied please get in touch with us.