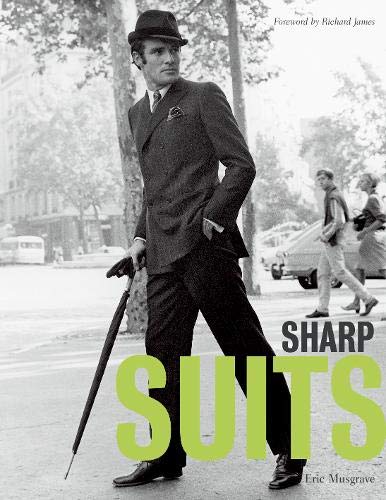 Clothes maketh the man. In Sharp Suits we examine the fascinating history and evolution of the modern suit from the late seventeenth century to date. From eighteenth-century bespoke to the mass industrialisation of the twentieth century, we see how the uniform of the ruling classes became the utilitarian outfit of the worker.

Sharp Suits: A celebration of men's tailoring by Eric Musgrave

This book contains everything you need to know about suits, from the traditional designs of the early 1900s, to innovative contemporary variations. It was awarded Financial Times' Fashion Book of the Year.

Clothes maketh the man. For millions of men across the world the common denominator that identifies them is the suit. Just three and a half metres of fabric, some internal shaping elements, lining, buttons and several metres of thread are all it takes to produce the jacket-and-trouser combination that can be seen from boardrooms to bars, wherever men gather.

In Sharp Suits we examine the fascinating history and evolution of the modern suit from the late seventeenth century to date. From eighteenth-century bespoke to the mass industrialization of the twentieth century, we see how the uniform of the ruling classes became the utilitarian outfit of the worker. A series of thematic chapters also illustrate how the universal staple of a man's wardrobe can play many different roles and, chameleon-like, can mean different things in different situations. From the Duke of Windsor to The Thin White Duke, David Bowie; from James Brown to The Jamel from Guys and Dolls to The Godfather, movie stars, rock stars, heroes and villains, philanthropists, presidents and gangsters - all these men and many more have dressed to impress in a matching jacket and trousers and have found that a suit will suit them very well.

'Clothes can 'do a job'. A well-cut suit can make you slimmer, taller, sexier, more elegant or business-like.' Sir Paul Smith

'The ultimate history of the world of suiting' * The Jackal *
Eric has written about fashion for over 25 years. An award-winning editor-in-chief of Drapers, the UK's top fashion business weekly, he has also held senior roles at Men's Wear, International Textiles (Amsterdam), Fashion Weekly and Sportswear International (Milan). He was the launch editor of men's style mag, For Him Magazine (now FHM). He is now a consultant to the fashion business and writes for many publications.
GOR002112185
9781862058521
1862058520
Sharp Suits: A celebration of men's tailoring by Eric Musgrave
Eric Musgrave
Used - Very Good
Hardback
Pavilion Books
2009-10-05
200
N/A
Book picture is for illustrative purposes only, actual binding, cover or edition may vary.
This is a used book - there is no escaping the fact it has been read by someone else and it will show signs of wear and previous use. Overall we expect it to be in very good condition, but if you are not entirely satisfied please get in touch with us
Trustpilot