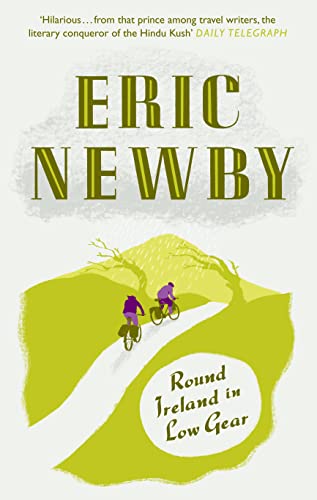 Round Ireland in Low Gear
by Eric Newby

'You've had some pretty crazy ideas in your life, Newby, but this is the craziest.' Grandmother Wanda Newby was exasperated after continuous rain, snow, and gales that knocked from her bike. Twice.

Round Ireland in Low Gear Summary

Round Ireland in Low Gear by Eric Newby

'You've had some pretty crazy ideas in your life, Newby, but this is the craziest.' Grandmother Wanda Newby was exasperated after continuous rain, snow, and gales that knocked from her bike. Twice.

To avoid other tourists, Eric Newby had decided that the depths of winter would be the very best time to explore Ireland by mountain bike. More astonishing still, he managed to persuade Wanda, his long-suffering wife and life-long co-traveller, to accompany him - mainly, she admitted, to 'keep him out of trouble'. Lashed by winter storms, fuelled by Guinness and warmed by thermal underwear, their panniers laden with antique books on Ireland, the elderly adventurers cycle the highways and byways, encountering hospitable locals, swaying saints and ferocious dogs.

From the shores of Donegal to the holy mountains, Newby guides the reader on a tale of mishap and magic, all in his own peculiar style of humour and charm, relishing his never-ending curiosity of the world and his insatiable quest for adventure.

Round Ireland in Low Gear Reviews

'Another delightful book - and one, surely, without risk of imitation' Sunday Times

'Hilarious Gaelic gallimaufry put together by that prince among travel writers, the literary conqueror of the Hindu Kush' Daily Telegraph

'His eternal curiosity in common humanity, his love of obscure facts and random delving into byways of history, mean that he is always entertaining. He carries his readers with him, effortlessly sharing his own enthusiasm' Literary Review

'Although he deplores the increasing uniformity of travel, he writes and travels with a sense of wonder that his 68 years have failed to diminish' Scotsman

Eric Newby was born in London in 1919. In 1938, he joined the four-masted Finnish barque Moshulu as an apprentice and sailed in the last Grain Race from Australia to Europe, by way of Cape Horn. During World War II, he served in the Black Watch and the Special Boat Section. In 1942, he was captured and remained a prisoner-of-war until 1945. He subsequently married the girl who helped him to escape, and for the next fifty years, his wife Wanda was at his side on many adventures. After the war, he worked in the fashion business and book publishing but always travelled on a grand scale, sometimes as the Travel Editor for the Observer. He was made CBE in 1994 and was awarded the Lifetime Achievement Award of the British Guild of Travel Writers in 2001. Eric Newby died in 2006.

GOR002692783
Round Ireland in Low Gear by Eric Newby
Eric Newby
Used - Very Good
Paperback
HarperCollins Publishers
2011-01-06
320
0007367929
9780007367924
N/A
Book picture is for illustrative purposes only, actual binding, cover or edition may vary.
This is a used book - there is no escaping the fact it has been read by someone else and it will show signs of wear and previous use. Overall we expect it to be in very good condition, but if you are not entirely satisfied please get in touch with us.