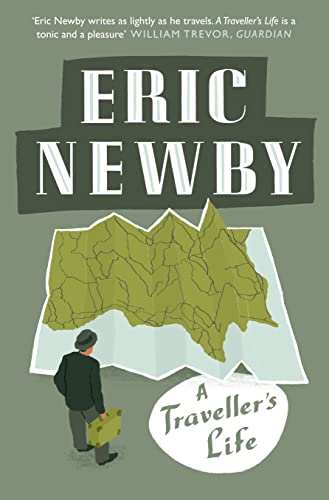 A Traveller's Life
by Eric Newby

A chronicle of travels, some homely some exotic, from the man who can make a schoolboy holiday in Swanage as colourful as a walk in the Hindu Kush.

A Traveller's Life by Eric Newby

A chronicle of travels, some homely some exotic, from the man who can make a schoolboy holiday in Swanage as colourful as a walk in the Hindu Kush.

Eric Newby's life of travel began in 1919, on pram-ride adventures with his mother into the dark streets of Barnes and the chaotic jungles of Harrods, and progressed to solo, school-bound adventures around the slums of darkest Hammersmith. His interest piqued, Newby's wanderlust snowballed, and his adventures multiplied, as he navigated the London sewer system, bicycled to Italy and meandered the wilds of New York's Broadway. Whether travelling abroad as a high-fashion buyer for a British department store or for pure adventure as a travel writer, even when reluctantly participating in a tiger shoot in India, Newby chronicles his adventures with verve, humour and infectious enthusiasm.

After nine years as the travel editor for the Observer, Newby reluctantly gave up the post, eschewing the new form of human-as-freight travel. However, this change was certainly no pity for his readers, as the latter-day Newby continued on his unwavering quest for fascinating detail and adventure wherever he roamed, whether on two feet or two wheels. `A Traveller's Life' chronicles the incredible adventures of one of the best-loved tour guides in the history of travel writing.

'Eric Newby writes as lightly as he travels. "A Traveller's Life" is a tonic and a pleasure' William Trevor, Guardian

'The thing that sets Eric Newby quite apart from other literate travellers is his gusto. Where others flutter on impressionistic wings, tread self-consciously across unpeopled wastes, or muse lyrically and sometimes disproportionately about the past, Newby barges into everything with relish and mockery in the very opposite of the grand manner. . . . Everything Eric Newby has written is a joy. This compendium is a treat' Geoffrey Moorhouse, The Times

'The highly engaging peripatetics of a man who was born with a natural hunger for lonely and exacting places, a wry but charitable outlook on his scurrying fellows, and a silver pen in his hand' Observer

'This is a collection of jewelled vignettes: part travel, part life. A feast. . . . One of the few great travel writers who makes you want to follow in his footsteps. . . . As he travels on, Newby never loses this childhood freshness of vision, his essential innocence as a traveller. Perhaps this is his greatest gift' Times Literary Supplement

'Whatever his quest may be, he allows us to accompany him vicariously on it ... and his book is a delight to read' Auberon Waugh

'A Traveller's Life offers a high-spirited collection of memories, packed with good things, of a man who can make a schoolboy holiday in Swanage as colourful as a walk in the Hindu Kush' Observer

'Eric Newby's admirers will not be disappointed' Listener

Eric Newby was born in London in 1919. In 1938, he joined the four-masted Finnish barque Moshulu as an apprentice and sailed in the last Grain Race from Australia to Europe, by way of Cape Horn. During World War II, he served in the Black Watch and the Special Boat Section. In 1942, he was captured and remained a prisoner-of-war until 1945. He subsequently married the girl who helped him to escape, and for the next fifty years, his wife Wanda was at his side on many adventures. After the war, he worked in the fashion business and book publishing but always travelled on a grand scale, sometimes as the Travel Editor for the Observer. He was made CBE in 1994 and was awarded the Lifetime Achievement Award of the British Guild of Travel Writers in 2001. Eric Newby died in 2006.

GOR002495811
A Traveller's Life by Eric Newby
Eric Newby
Used - Very Good
Paperback
HarperCollins Publishers
2010-10-28
304
0007367872
9780007367870
N/A
Book picture is for illustrative purposes only, actual binding, cover or edition may vary.
This is a used book - there is no escaping the fact it has been read by someone else and it will show signs of wear and previous use. Overall we expect it to be in very good condition, but if you are not entirely satisfied please get in touch with us.