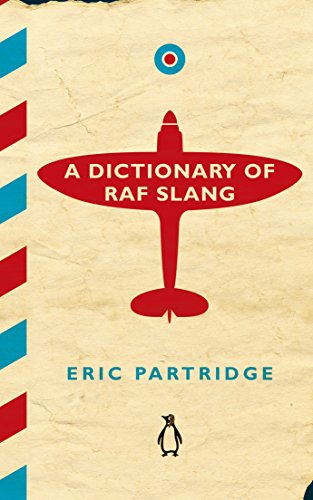 A Dictionary of RAF Slang
by Eric Partridge

A Dictionary of RAF Slang Summary

A Dictionary of RAF Slang by Eric Partridge

For ANYONE WHO IMAGINES THEMSELVES FLYING A SPITFIRE.

Drop your visiting cards, put aside your beer-lever, stop being a half-pint hero and discover the gloriously funny slang which was part of everyday life in two world wars.

Passion-killers: Airwomen's service knickers, whether twilights (the lighter, summer-weight variety) or black-outs (the navy-blue winter-weights). A wise directive has purposely made them as unromantic in colour and in design as a wise directive could imagine.

Thanks to the work of Eric Partridge in 1945, the hilarious slang of the Royal Air Force during the first two World Wars has been preserved for generations to come. While some phrases like 'chocks away!' have lasted to this day, others deserve to be rediscovered...

Beer-lever: From pub-bars, meaning the 'Joystick' of an aircraft.
Canteen cowboy: A ladies' man.
Half-pint hero: A boaster. One who exemplifies the virtue of Dutch courage without having the trouble of going into action.
Tin fish: A torpedo.
Umbrella man: A parachutist.
Visiting-card: A bomb.
Wheels down: Get ready - especially to leave a bus, tram, train. From lowering the wheels, preparatory to landing.
Whistled: In a state of intoxication wherein one tends to whistle cheerfully and perhaps discordantly.

The Dictionary of RAF Slang is a funny and fascinating insight into the lives of our RAF heroes, in a time gone by.

A Dictionary of RAF Slang Reviews

Drop your visiting cards, put aside your beer-lever, stop being a half-pint hero and discover the gloriously funny slang which was part of everyday life in the RAF during two world wars in this classic book. * from the publisher's description *

Eric Partridge (1894-1979) was a New Zealand lexicographer of the English language. He served in the Australian infantry during WWI, during which time he developed an interest in military slang. In 1945, he wrote The Dictionary of RAF Slang after working for the air force, and wrote a total of over forty books about the English language over the course of his lifetime.

GOR008167125
A Dictionary of RAF Slang by Eric Partridge
Eric Partridge
Used - Very Good
Hardback
Penguin Books Ltd
2016-11-17
64
1405930594
9781405930598
N/A
Book picture is for illustrative purposes only, actual binding, cover or edition may vary.
This is a used book - there is no escaping the fact it has been read by someone else and it will show signs of wear and previous use. Overall we expect it to be in very good condition, but if you are not entirely satisfied please get in touch with us.