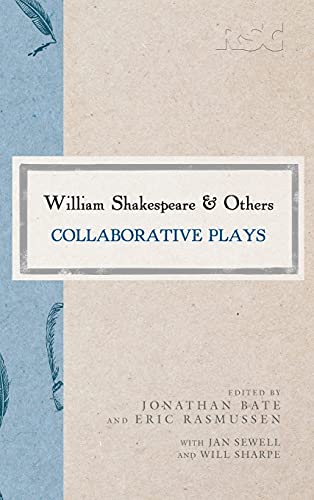 William Shakespeare and Others by Eric Rasmussen

Developed in partnership with The Royal Shakespeare Company, this is the first edition for over a hundred years of the fascinatingly varied body of plays that has become known as 'The Shakespeare Apocrypha'.

William Shakespeare and Others: Collaborative Plays by Eric Rasmussen

Developed in partnership with The Royal Shakespeare Company, this is the first edition for over a hundred years of the fascinatingly varied body of plays that has become known as 'The Shakespeare Apocrypha'. As a companion to their award-winning The RSC Shakespeare: Complete Works, renowned scholars Jonathan Bate and Eric Rasmussen, supported by a dynamic team of co-editors, now provide a fascinating insight into ten plays in which Shakespeare may have had a hand. A magisterial essay by Will Sharpe provides a comprehensive account of the Authorship and Attribution of each play.

Combining outstanding textual scholarship with elegant writing and design, this unique collection allows us to revisit the question of what is Shakespearean. It is an indispensable book for students, teachers, performers, scholars and lovers of Shakespeare everywhere.

'The ten plays collected in William Shakespeare & Others are worth serious attention ...it is difficult to imagine anyone seriously interested in Shakespeare who would not want to read these plays...Bate and Rasmussen deserve our gratitude for re-presenting these fascinating dramas so handsomely and conveniently for today's readership' - Standpoint 'The greatness of Shakespeare's art has misled many readers imagining that his genius was somehow beyond history. Among the virtues of William Shakespeare & Others is that it corrects that misapprehension. Shakespeare was firmly of his age in the way he wrote and worked...the evidence of collaboration demonstrates that the author was a jobbing playwright' - The Times 'a major edition of collaborative plays bearing the Bard's name.' - The Observer 'This is the definitive account of what else [Shakespeare] lent his genius to' - Stratford Observer 'Eminent Shakespeare scholars Jonathan Bate and Eric Rasmussen have collected 10 plays known as The Shakespeare Apocrypha for the first time in more than 100 years...this major new edition of collaborative plays has the only scene from any play to survive in Shakespeare's own handwriting' - The Birmingham Post 'The volume offers us a provocative glimpse of a world in which authorship is communal and complex, and thereby takes us further along the road towards properly understanding Shakespeare as, in the fullest sense, a man of the theatre' - Around the Globe
JONATHAN BATE is Provost of Worcester College and Professor of English Literature in the University of Oxford, UK. Well known as a critic, biographer and broadcaster, he has held visiting posts at Harvard, Yale and UCLA, and was previously King Alfred Professor at the University of Liverpool and Professor of Shakespeare at the University of Warwick. Among his many books are a biography of Shakespeare, Soul of the Age, and a history of his fame, The Genius of Shakespeare. His biography of the poet John Clare won Britain's two oldest literary awards, the Hawthornden Prize and the James Tait Black Prize. His one-man play for Simon Callow, Being Shakespeare, was performed in Edinburgh, London, New York and Chicago, and he was consultant curator for the British Museum's major exhibition for the London 2012 Cultural Olympiad, Shakespeare Staging the World. He is a Governor of the Royal Shakespeare Company, Vice-President (Humanities) of the British Academy, and a Fellow of the Royal Society of Literature.

Eric Rasmussen is Foundation Professor of English and Chair at the University of Nevada. His recent publications include the award-winning catalogue raisonne The Shakespeare First Folios: A Descriptive Catalogue, co-edited with Anthony James West, and its companion volume The Shakespeare Thefts: In Search of the First Folios (Palgrave Macmillan). He is co-author, with Lars Engle, of Studying Shakespeare's Contemporaries (Wiley Blackwell) and is an editor of The Norton Anthology of English Renaissance Drama, and of plays in the Arden Shakespeare series, the New Variorum Shakespeare, the Oxford World's Classics series, the Revels Plays series, and the Cambridge Complete Works of Ben Jonson. He has served on the Board of Trustees of the Shakespeare Association of America, on the General Council of the Malone Society, and as General Textual Editor of the Internet Shakespeare Editions Project - one of the most visited Shakespearean websites in the world.

NPB9781137271440
9781137271440
1137271442
William Shakespeare and Others: Collaborative Plays by Eric Rasmussen
Eric Rasmussen
The RSC Shakespeare
New
Hardback
Macmillan Education UK
2013-10-28
752
Winner of Falstaff Awards: Best Book, Publication, or Recording 2013
Book picture is for illustrative purposes only, actual binding, cover or edition may vary.
This is a new book - be the first to read this copy. With untouched pages and a perfect binding, your brand new copy is ready to be opened for the first time
Trustpilot