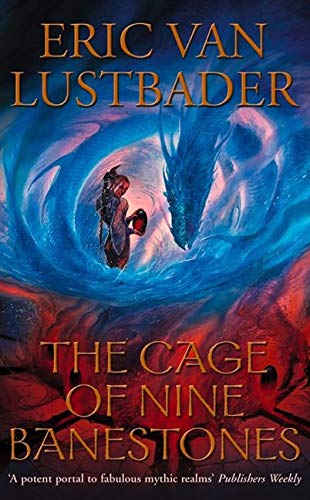 The Cage of Nine Banestones
by Eric Van Lustbader

The third volume in this epic fantasy in the tradition of Frank Herbert's phenomenal DUNE series.

The Cage of Nine Banestones Summary

The third volume in this epic fantasy in the tradition of Frank Herbert's phenomenal DUNE series.

For one hundred and one years the Kundalans have lived under the oppressive yoke of the V'ornn invaders. But according to prophecy a saviour, the Dar Sala-at, will arrive at their hour of greatest need. And by the forging together of two souls - those of a V'ornn prince and a young Kundalan woman named Riane - this hero has now been incarnated.

But the sauromicians, a secret society of outcast sorcerers, are plotting the Dar Sala-at's downfall. At their disposal they have eight ancient banestones, recovered from the sacred buried city of Za Hara-at. Each stone is a source of immense malevolent power, but if the sauromicians find the final missing stone, all nine together will form an engine of unimaginable destruction, bringing doom to Kundala and all of her inhabitants.

Although beset by enemies on all sides, Riane is aided in her quest by a loyal and loving group of trusted friends, both V'ornn and Kundalan. Together they are committed to overcoming the dangers in their path to ensure that Riane fulfils the prophecy and Kundala is released from peril.

The Cage of Nine Banestones Reviews

Praise for the Pearl Saga:

'Lustbader creates intriguing and conflicted characters and spins a complex world of religion, magic and technology around them' Amazon.com

'The centuries long occupation of Kundala and its by now subtle oppressions is ably drawn ... pulls all the right levers' SFX

GOR001500237
The Cage of Nine Banestones: The Pearl Saga Volume Three by Eric Van Lustbader
Eric Van Lustbader
Used - Very Good
Paperback
HarperCollins Publishers
2004-02-02
640
0006486096
9780006486091
N/A
Book picture is for illustrative purposes only, actual binding, cover or edition may vary.
This is a used book. We do our best to provide good quality books for you to read, but there is no escaping the fact that it has been owned and read by someone else previously. Therefore it will show signs of wear and may be an ex library book.