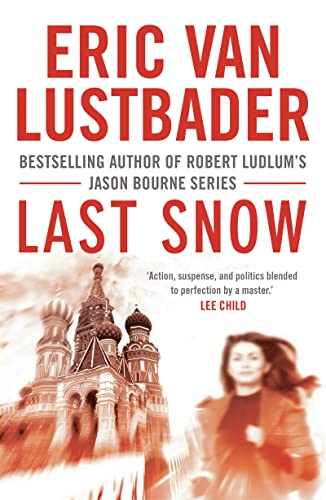 An American senator turns up dead and the President wants to know why. Jack McClure is sent to investigate, following a perilous trail of diplomats, criminals and corrupt politicians.

Four days ago, US senator Lloyd Berns was killed in a hit-and-run on the island of Capri. His death deals a serious blow to President Carson's precarious new administration - but more worrying is that Berns was never officially on Capri. According to the White House, Berns was on a tour of the Ukraine.

Agent Jack McClure is in Moscow, babysitting Carson's troubled daughter. But the President needs Jack to investigate the senator's final days in the Ukraine, and since Alli Carson won't be parted from her protector, he'll have to take her along.

Their starting point is the senator's last known contact: K. Rochev. But all they find at Rochev's address is the body of a young woman, brutally executed. And now Jack and Alli have attracted dangerous attention from the Ukranian police, the FSB, and the Russian mafia...

'Rarely have I read a book that grabs you so fast in the opening scene.' Jeffrey Deaver.
'Action, suspense, and politics blended to perfection by a master' Lee Child.
'The master of the smart thriller' Nelson Demille.

Eric Van Lustbader is the author of more than twenty-five novels, which have been translated into over twenty languages.

GOR005581605
Last Snow by Eric Van Lustbader
Eric Van Lustbader
Jack Mcclure
Used - Very Good
Paperback
Head of Zeus
2013-11-07
464
1908800348
9781908800343
N/A
Book picture is for illustrative purposes only, actual binding, cover or edition may vary.
This is a used book - there is no escaping the fact it has been read by someone else and it will show signs of wear and previous use. Overall we expect it to be in very good condition, but if you are not entirely satisfied please get in touch with us.