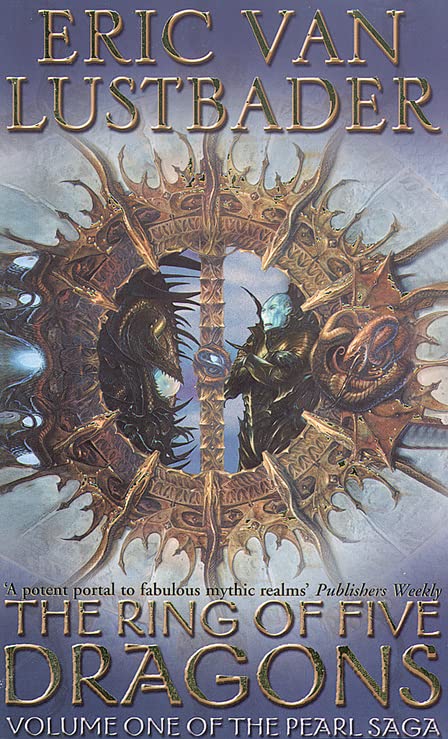 The Ring of Five Dragons
by Eric Van Lustbader

The opening volume in a huge epic fantasy in the tradition of Frank Herbert's DUNE series.

The Ring of Five Dragons Summary

The Ring of Five Dragons: The Pearl Saga Volume One by Eric Van Lustbader

The opening volume in a huge epic fantasy in the tradition of Frank Herbert's DUNE series.

Struggling to survive an existence of enforced slavery on their home planet, the people of Kundala are slowly dying. Their oppressors, the V'ornn, a technologically advanced, alien race, have reigned over the Kundalans with unyielding power for more than one hundred years.

Only through the power of the lost, god-given Pearl can the Kundalans be saved from extinction, for within it lies a secret so potent it could tear the entire planet apart.

However, only one man is destined to find and wield the awesome power of the Pearl. His name is Annon, high prince of the alien V'ornn, preordained to become his enemies' saviour - the fabled and long awaited Dar Sala-at.

To fulfil his destiny he first must die and be reborn, his spirit fused into the body of a young Kundalan girl, Riane. As coexisting spirits in a single body, the two young identities of different gender, culture and race, will not only have to hide the quest for the Pearl from those who would seek to try to snatch such power for themselves, but also resolve deeply ingrained prejudices. For without doing so, the Pearl will never be found, and the Kundalans, and Annon, are doomed.

GOR001337269
The Ring of Five Dragons: The Pearl Saga Volume One by Eric Van Lustbader
Eric Van Lustbader
Used - Very Good
Paperback
HarperCollins Publishers
2002-01-23
600
000648607X
9780006486077
N/A
Book picture is for illustrative purposes only, actual binding, cover or edition may vary.
This is a used book - there is no escaping the fact it has been read by someone else and it will show signs of wear and previous use. Overall we expect it to be in very good condition, but if you are not entirely satisfied please get in touch with us.