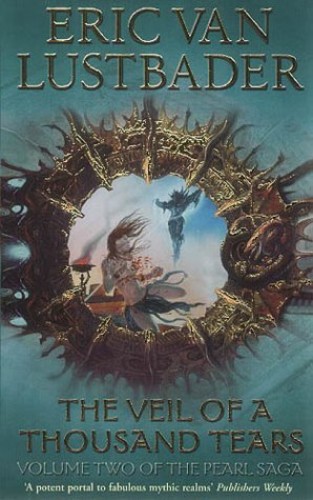 The Veil of A Thousand Tears
by Eric Van Lustbader

The second volume in this huge new fantasy in the tradition of Frank Herbert's phenomenal DUNE series.

The Veil of A Thousand Tears Summary

The Veil of A Thousand Tears: The Pearl Saga Volume Two by Eric Van Lustbader

The second volume in this huge new fantasy in the tradition of Frank Herbert's phenomenal DUNE series.

Ever since the V'ornn invasion the oppressed Kundalan have been dwindling in strength. Their religion is dying, their magic fading and their goddess all but forgotten. Only the fabled and long-awaited Dar Sala-at can find the long-lost, all-powerful Pearl and save them from extinction.

Against incredible odds Riane, the Dar Sala-at, has recovered the Ring of Five Dragons and fitted it into the Storehouse Door, behind which the Pearl should be found. But despite the prophecy the door will not open. Riane's protector, Giyan, explains that daemons must have escaped from the sorcerous abyss where they were locked away by the Goddess Miina aeons ago. What Giyan doesn't know is that one of those daemons is about to possess her body.

In order to retrieve Giyan before the daemon kills her, Riane must find the fabled Veil of a Thousand Tears, said to have been created from the tears of the Five Sacred Dragons of Miina and to hold the key to the secrets of Za Hara-at, the legendary city that will one day bring Kundalan and V'ornn together in peace. For this reason she is not the only one who seeks the Veil. The evil Gyrgon, Nith Batoxxx, is also on its trail, and soon Riane will be fighting him for her life.

In this fast-paced and compelling saga, best-selling author Eric Van Lustbader explores the conflicts that have driven civilizations since the dawn of time: between good and evil, technology and spirituality, faith and despair.

Customer Reviews - The Veil of A Thousand Tears

The Veil of A Thousand Tears Reviews

Praise for The Ring of Five Dragons:

`Lustbader creates intriguing and conflicted characters and spins a complex world of religion, magic and technology around them' Amazon.com

GOR001300284
The Veil of A Thousand Tears: The Pearl Saga Volume Two by Eric Van Lustbader
Eric Van Lustbader
Used - Very Good
Paperback
HarperCollins Publishers
2003-02-26
0006486088
9780006486084
N/A
Book picture is for illustrative purposes only, actual binding, cover or edition may vary.
This is a used book - there is no escaping the fact it has been read by someone else and it will show signs of wear and previous use. Overall we expect it to be in very good condition, but if you are not entirely satisfied please get in touch with us.