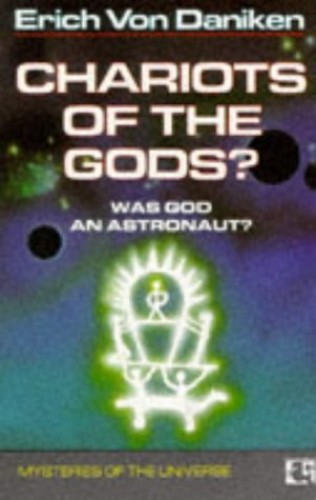 Chariots of the Gods
by Erich von Daniken

In Stock
$16.49
inc. GST
All over the world there are fantastic ruins and objects which cannot yet be explained by conventional theories. Erich von Daniken's book, which has sold 11 million English language copies, comes up with some controversial explanations.
Very Good Well Read
5 in stock

Chariots of the Gods Summary

Chariots of the Gods by Erich von Daniken

All over the world there are fantastic ruins and objects that cannot be explained by conventional history, archaeology or religion. In the ground-breaking Chariots of the Gods, Erich von Daniken provides answers to these questions...why do religious texts often refer to Gods who descend from fiery chariots? Why do modern space launch sites look like constructions on the plains of Nazca in Peru? Was God an astronaut? By looking at human history and the ruins of ancient civilisations with an open mind, Erich von Daniken offers a new solution to these eternal mysteries in Chariots of the Gods. Why, for instance, do the world's sacred books describe Gods who came down from the sky in fiery chariots and always promised to return? How could an ancient Sanskrit text contain an account which could only be of a journey in an alien craft? Compare photographs of American space centre launch sites to the constructions on the plains of Nazca in Peru. In order to understand the mysteries which Erich von Daniken has catalogued we must go back to these ancient relics with an open mind. We must call in the resources and experience of sciences other than archaeology. Chariots of the Gods is a provocative attempt to explain some of the universe's most interesting mysteries.Erich von Daniken has spent a lifetime gathering evidence to prove that, before the dawn of recorded history, our ancestors were visited by an alien race. Erich von Daniken was responsible for popularising the ancient astronaut hypothesis of human development. Orthodox historians have been sceptical but a vast public have been drawn to his ideas by instinctive interest and wonder. His 26 books have sold over 60 million copies in over 40 languages.

Chariots of the Gods Reviews

The book that started it all...Was God an astronaut? * Sunday Times *
Hugely influential work. * Daily Telegraph *
A worldwide publishing sensation...von Daniken's space-faring Gods and rewriting of human history have had a profound influence on both alternative archaeology and popular culture. * Fortean Times *

Erich von Daniken was born on April 14th, 1935 in Zofingen, Switzerland. During his formative years at the renowned College St-Michel in Fribourg, Switzerland, Erich von Daniken immersed himself in ancient holy writings and unsolved archaeological puzzles. As a young gastronome, he began writing articles before eventually authoring his international best seller Chariots of the Gods. Erich von Daniken has held countless lectures and discussions at public forums and educational institutions. His 40 books have sold over 67 million copies and have been translated into 32 languages.

GOR001305885
Chariots of the Gods by Erich von Daniken
Erich von Daniken
Used - Very Good
Paperback
Profile Books Ltd
1990-05-27
192
0285629115
9780285629110
N/A
Book picture is for illustrative purposes only, actual binding, cover or edition may vary.
This is a used book - there is no escaping the fact it has been read by someone else and it will show signs of wear and previous use. Overall we expect it to be in very good condition, but if you are not entirely satisfied please get in touch with us.