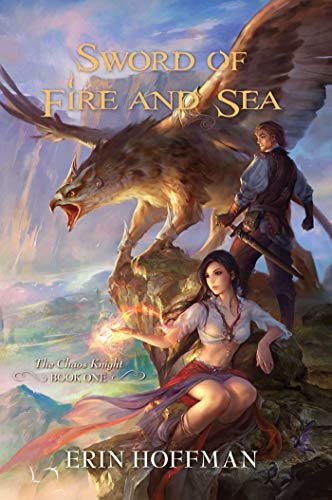 Sword Of Fire And Sea
by Erin Hoffman

Used Price
$20.99
inc. GST
Free Shipping in Australia
Vidarian finds himself at the intersection not only of the world's most volatile elements, but of colliding universes, and the ancient and alien powers that lurk between them...
Reviews:
Trustpilot
Very Good

Sword Of Fire And Sea Summary

Sword Of Fire And Sea by Erin Hoffman

Captain Vidarian Rulorat's great-grandfather gave up an imperial commission to commit social catastrophe by marrying a fire priestess. For love, he unwittingly doomed his family to generations of a rare genetic disease that follows families who cross elemental boundaries. Now Vidarian, the last surviving member of the Rulorat family, struggles to uphold his family legacy, and finds himself chained to a task as a result of the bride price his great-grandfather paid: The priestess Endera has called upon Vidarian to fulfill his family's obligation by transporting a young fire priestess named Ariadel to a water temple far to the south, through dangerous pirate-controlled territory. Vidarian finds himself at the intersection not only of the world's most volatile elements, but of the ancient and alien powers that lurk between them...

Sword Of Fire And Sea Reviews

"A fantastic debut novel.... Vividly descriptive, [Hoffman] quickly pulls the reader into her world and it is an interesting one full of gryphons, magic and good old-fashioned pirates. Her characters are well written, engaging, and realistic. ...Fans of fantasy series should definitely read this book."
-Portland Book Review

"This series debut by video game designer Hoffman features well-drawn characters, both human and mythical... Introducing a world of elemental magic, intelligent gryphons, and warring forces, this fantasy adventure is suitable for both YA and adult readers."
-Library Journal

"Both a modern and old-school high fantasy novel that only scratches the surface of a diverse and interesting world.... [With] Fire priestesses, gryphons, mind magic using mages, Goddesses, magic weapons, Air knights.... I was entertained and thoroughly amazed by the imagination that Hoffman brings to her writing.... Hoffman is a talent, there is no denying it. I would definitely like to see much more of the world of Andovar."
-SFSignal

Erin Hoffman is the author of Sword of Fire and Sea and Lance of Earth and Sky. She was born in San Diego, California, and now lives with her husband, two parrots, and a dog in the San Francisco bay area. Her college degree was eclectic and landed her in the strange waters of video game design, where she tells stories using a diabolical combination of character, controller, and math. Her games have been played by over four million kids and adults worldwide, and she is a graduate of the Odyssey Fantasy Writers Workshop.

GOR003044489
Sword Of Fire And Sea by Erin Hoffman
Erin Hoffman
Used - Very Good
Paperback
Prometheus Books
2011-06-21
277
1616143738
9781616143732
N/A
Book picture is for illustrative purposes only, actual binding, cover or edition may vary.
This is a used book - there is no escaping the fact it has been read by someone else and it will show signs of wear and previous use. Overall we expect it to be in very good condition, but if you are not entirely satisfied please get in touch with us.