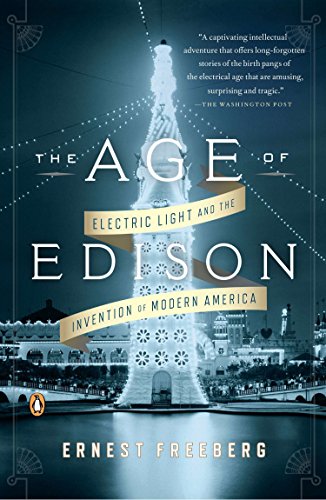 The Age of Edison
by Ernest Freeberg

The Age of Edison Summary

The Age of Edison: Electric Light and the Invention of Modern America by Ernest Freeberg

The late nineteenth century was a period of explosive technological creativity, but more than any other invention, Thomas Edison's incandescent light bulb marked the arrival of modernity, transforming its inventor into a mythic figure and avatar of an era. In The Age of Edison, award-winning author and historian Ernest Freeberg weaves a narrative that reaches from Coney Island and Broadway to the tiniest towns of rural America, tracing the progress of electric light through the reactions of everyone who saw it and capturing the wonder Edison's invention inspired. It is a quintessentially American story of ingenuity, ambition, and possibility in which the greater forces of progress and change are made by one of our most humble and ubiquitous objects.

The Age of Edison Reviews

"Mr. Freeberg's broad research adds up to a vivid social history with parallels for today's technology innovators and for those who wish to increase their number. It underscores the point that the work of Edison and other pioneers of light took place in an unusual setting, a period in which American invention was remarkably active and fertile... The Age of Edison comes at a fitting time, the close of the era of the incandescent light. When the old stocks of incandescents run out, it may be the end of pleasant illumination at a cheap price--that is, until another Thomas Edison finds a way."
--The Wall Street Journal

"Freeberg takes us on a captivating intellectual adventure that offers long-forgotten stories of the birth pangs of the electrical age that are amusing, surprising and tragic."
--Washington Post

"One of the many pleasures of Age of Edison, Ernest Freeberg's engaging history of the spread of electricity throughout the United States, is that he captures the excitement and wonder of those early days, when 'a machine that could create enough cheap and powerful light to hold the night at bay' promised 'liberation from one of the primordial limits imposed by nature on the human will'... Freeberg's thoughtful and thought-provoking book quietly suggests that, to properly distribute and control such a powerful force, commercial initiative and a sense of civic responsibility were equally essential."
--Los Angeles Times

"A dynamo of a book powered by an infectious enthusiasm for the can-do spirit of Edison and rival geniuses racing to turn night into day. Freeberg writes with verve and uncommon clarity, all the while deeply enriching our understanding of an age raring to embrace modernity."
--A. Roger Ekirch, author of At Day's Close: Night in Times Past

"Ernest Freeberg's fascinating account of the arrival and impact of electric lighting in America fills an important gap in the history of this subject. This well-written and insightful book should appeal both to scholars and lay readers, all of whom will learn much about the complex history of the adoption of this new technology."
--Paul Israel, author of Edison: A Life of Invention; General Editor, The Thomas Edison Papers

"Freeberg's deft social history explores a remarkable period in America's cultural and economic development. By understanding the post-Edison world we can see how nightlife really began; how our workdays grew considerably longer; and how the urban gloom was extinguished by the commerce of illumination."
--Jon Gertner, author of The Idea Factory: Bell Labs and the Great Age of American Innovation

Ernest Freeberg is the author of The Education of Laura Bridgman and Democracy's Prisoner, which was a Los Angeles Times Book Prize finalist. He is a distinguished professor of humanities at the University of Tennessee and lives in Knoxville, Tennessee.

GOR007385819
The Age of Edison: Electric Light and the Invention of Modern America by Ernest Freeberg
Ernest Freeberg
Used - Very Good
Paperback
Penguin Books Ltd
2014-07-31
368
0143124447
9780143124443
N/A
Book picture is for illustrative purposes only, actual binding, cover or edition may vary.
This is a used book - there is no escaping the fact it has been read by someone else and it will show signs of wear and previous use. Overall we expect it to be in very good condition, but if you are not entirely satisfied please get in touch with us.