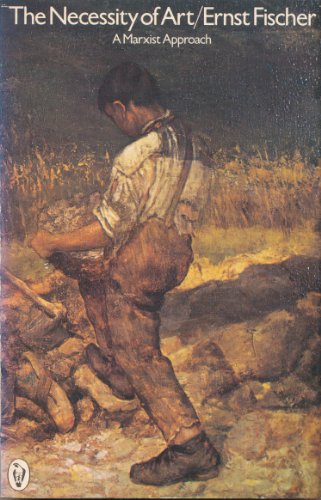 The Necessity of Art
by Ernst Peter Fischer

In Stock
$21.49
inc. GST
The Austrian poet and critic supports the idea of the universal necessity of art by exploring the history of literary and fine arts from a Marxist point of view.
Good Well Read
Only 1 left

The Necessity of Art Summary

The Necessity of Art: A Marxist Approach by Ernst Peter Fischer

"Art is necessary in order that man should be able to recognize and change the world. But art is also necessary by virtue of the magic inherent in it."--Ernst Fischer

Reissued with an introduction by John Berger, The Necessity of Art is a beautifully written meditation on art's importance in viewing the world in which we live. In this wide-ranging and erudite exploration of literary and fine art, Fischer looks at the relationship between the creative imagination and social reality, arguing that truthful art must both reflect existence in all its flaws and imperfections, and help show how change and improvement might be brought about.

With his emphasis on the individual's need to engage with society, his rejection of rampant consumerism and hypertechnology, and his indomitable optimism, this radical, affirmative and humane vision of the artistic endeavor remains as timely today as when it was first published sixty years ago.

The Necessity of Art Reviews

"People have always needed art: but why have they needed it? And what shaped the forms whereby they satisfied their need? Fischer's answers to these questions should be voraciously studied and debated."--Kenneth Tynan

Born in Austria, Ernst Fischer (1899-1972) studied philosophy before working as a newspaper editor, radio commentator, and writer; in the years after World War II he became a leading cultural commentator. His books include Art Against Ideology and The Necessity of Art.

Storyteller, novelist, essayist, screenwriter, dramatist and critic, John Berger is one of the most internationally influential writers of the last fifty years. His many books include Ways of Seeing, the fiction trilogy Into Their Labours, Here Is Where We Meet, the Booker Prize-winning novel G, Hold Everything Dear, the Man Booker-longlisted From A to X, and A Seventh Man.

GOR001371530
The Necessity of Art: A Marxist Approach by Ernst Peter Fischer
Ernst Peter Fischer
Peregrine Books
Used - Good
Paperback
Penguin Books Ltd
1978-12-14
240
0140551514
9780140551518
N/A
Book picture is for illustrative purposes only, actual binding, cover or edition may vary.
The book has been read but remains in clean condition. All pages are intact and the cover is intact. Some minor wear to the spine.