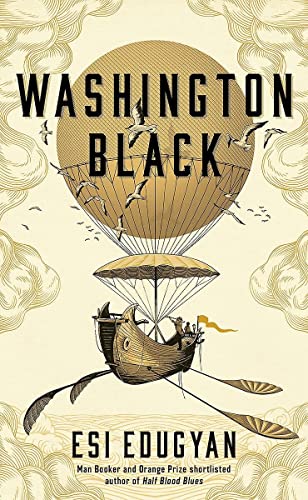 SHORTLISTED FOR THE MAN BOOKER PRIZE 2018 WINNER OF THE GILLER PRIZE FINALIST FOR THE CARNEGIE MEDAL AND THE ROGERS WRITERS TRUST FICTION PRIZE New York Times Top Ten Book of the Year 2018 When two English brothers take the helm of a Barbados sugar plantation, Washington Black - an eleven year-old field slave - finds himself selected as personal servant to one of these men. The eccentric Christopher 'Titch' Wilde is a naturalist, explorer, scientist, inventor and abolitionist, whose single-minded pursuit of the perfect aerial machine mystifies all around him. Titch's idealistic plans are soon shattered and Washington finds himself in mortal danger. They escape the island together, but then then Titch disappears and Washington must make his way alone, following the promise of freedom further than he ever dreamed possible. From the blistering cane fields of Barbados to the icy wastes of the Canadian Arctic, from the mud-drowned streets of London to the eerie deserts of Morocco, Washington Black teems with all the strangeness and mystery of life. Inspired by a true story, Washington Black is the extraordinary tale of a world destroyed and made whole again.
Washington Black is nothing short of a masterpiece. Esi Edugyan has a rare talent for turning over little known stones of history and giving her reader a new lens on the world, a new way of understanding subject matter we arrogantly think we know everything about. This book is an epic adventure and a heartfelt tale about love and morality and their many contradictions. I loved it. -- Attica Locke
Washington Black is a profoundly humane story about false idols, the fickleness of fortune and whether a slave, once freed, can ever truly be free. * The Times *
Edugyan displays as much ingenuity and resourcefulness as her main characters ... A thoughtful, boldly imagined book that broadens inventive possibilities for the antebellum novel * starred Kirkus review *
Praise for Half-Blood Blues 'Edugyan never stumbles with her storytelling, not over one sentence * Independent *
Lyrical and genuinely exciting; a captivating book that races along with verve and panache. * Daily Express *
Edugyan really can write ... redemptive * Guardian *
Ingenious... * Daily Telegraph *
Superbly atmospheric... [a] brilliant, fast-moving novel. * The Times *
Assured, vivid and persuasive... Impressively evocative of period and place * Time Out *
You'll relish how Edugyan's consistent, arresting musicality, at both the sentence and structural levels, develops its own accurate truth about experience... literary genius * Dallas News *
Mesmerising... A remarkable novel * Morning Star *
what stands out most is its cadenced narration and slangy dialogue, as conversations, both spoken and unspoken, snap, sizzle, and slide off the page. * Publisher's Weekly *
shines with knowledge, emotional insight, and historical revisionism, yet it never becomes overburdened by its research. * Canberra Times *
a triumph... punchy and atmospheric. * Sunday Times *
Praise for Half-Blood Blues 'Simply stunning, one of the freshest pieces of fiction I've read. A story I'd never heard before, told in a way I'd never seen before. I felt the whole time I was reading it like I was being let in on something, the story of a legend deconstructed. It's a world of characters so realized that I found myself at one point looking up Hieronymus Falk on Wikipedia, disbelieving he was the product of one woman's imagination -- Attica Locke
Sublime... * Booklist *
Conversations, both spoken and unspoken, snap, sizzle, and slide off the page * Publishers' Weekly *
Gripping... * Irish Times *
A pacey yet thoughtful exploration of freedom, and our moral compulsion to act * Spectator *
Nimble storytelling . * International Herald Tribune *
An extraordinary, picturesque tale... A richly entertaining read * BBC History *
Magnificent and strikingly visual prose * Financial Times *
The beauty here lies in Edugyan's language, which is precise, vivid, always concerned with word craft and captivating for it... Edugyan's fiction always stays strong, beautiful and beguiling * The Observer *
Excellent ... Edugyan can write beautifully ... In places, the novel is devastating, precisely because she is never gratuitous or sentimental ... In a story that is escapist, as well as poignant and political, Edugyan enjoys taking her readers where they are least expecting to go. * Irish Independent *
An enthralling meditation on the weight of freedom, wrapped in a rousing adventure story stretching to the ends of the earth... beautiful and affecting * Boston Globe *
A powerful, twisting work of historical fiction ... Edugyan is a marvelous writer * Seattle Times *
elegant and nuanced * Christian Science Monitor *
Washington Black's triumph is to make us think searchingly about slavery and racism, while entertaining us in the style of Jules Verne or Dickens... [An] epic, powerfully imaginerd continent-spanning tale * Times Literary Supplement *
[A] masterful novel * The Economist *
A full-pelt adventure story featuring hot-air balloon crashes, blizzards in the Arctic, scientific discovery, knife fights in dark alleys, bounty hunters and forbidden romance ... Washington Black is entertaining, gripping and actually readable * Sunday Times *
A thoughtful, profound epic that feels destined to become a future classic ... It's a masterpiece which is full of surprises, and is that rare book that should appeal to every kind of reader. * Guardian *
The Canadian novelist Esi Edugyan wove slavery and the science of fight into the boisterously imaginative caper of Washington Black * The Telegraph *
Esi Edugyan's Washington Black has been shortlisted for the Man Booker Prize 2018 and The Scotiabank Giller Prize 2018. Her previous novel, Half Blood Blues won the Scotiabank Giller Prize and was a finalist for the Man Booker Prize, the Governor-General's Literary Award, the Rogers Writers' Trust Prize, and the Orange Prize. She lives in Victoria, British Columbia.
GOR009764344
9781781258972
178125897X
Washington Black: Shortlisted for the Man Booker Prize 2018 by Esi Edugyan
Esi Edugyan
Used - Very Good
Paperback
Profile Books Ltd
2018-08-02
432
Short-listed for LA Times Book Prize 2019 (UK) Long-listed for PEN USA Literary Awards 2019 (UK)
Book picture is for illustrative purposes only, actual binding, cover or edition may vary.
This is a used book - there is no escaping the fact it has been read by someone else and it will show signs of wear and previous use. Overall we expect it to be in very good condition, but if you are not entirely satisfied please get in touch with us
Trustpilot