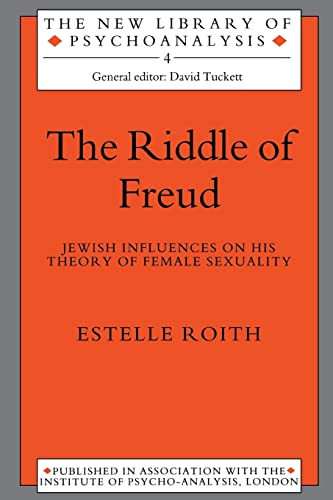 The Riddle of Freud
by Estelle Roith

In Stock
$35.99
+10% GST
Argues that certain important elements of Judaic culture were so integral a part of Freud's personality that they became visible in his work and especially in his attitudes to and theories of femininity. This work describes Freud's theory of femininity and its implications for psychoanalytic theories of human development and motivation in general.
Very Good
Only 1 left

The Riddle of Freud Summary

The Riddle of Freud: Jewish Influences on his Theory of Female Sexuality by Estelle Roith

In The Riddle of Freud Estelle Roith argues that certain important elements of Judaic culture were so integral a part of Freud's personality that they became visible in his work and especially in his attitudes to and theories of femininity. Freud's formulation of femininity, which the author contends is mistaken, is seen not as a simple error but as resulting from a complex bias in which personal and social factors are interrelated. The author proposes that the considerable ambivalence experienced by Freud about his sexual, cultural, and social identity, in which both overt and covert aspects of his Jewish culture survived, could not be surmounted by him in the case of women.

Estelle Roith describes Freud's theory of femininity and its implications for psychoanalytic theories of human development and motivation in general. She examines Freud's relationships with his women disciples and also the social and political conditions that obtained for Jews of Freud's time. Finally, her book helps illuminate the reasons for Freud's emphasis on the paternal power within the Oedipus complex. It is essential reading for psychoanalysts and psychotherapists, for students of women's issues, and all those interested in Freud's impact on contemporary Western thought.

The Riddle of Freud Reviews

"Estelle Roith has written an intelligent, readable, well-researched book on Freud's life and work, examining the Jewish cultural background and family influences which dominated and inevitably contributed to his view of the world, which found expression in his psychoanalytical theories. - Group Analysis

"The first study I know of which brings together the Jewish Freud with the theorist of femininity, and which most persuasively argues an essential link between the two." - Naomi Segal, Journal of Jewish Studies, 1987

"This is a deeply researched, deeply felt account of how Freud, and other psychoanalysts such as Karl Abraham, could reach such appalling positions on the nature of women's sexuality. In brief, by locating Freud's thinking in its Judaic context, Roith is able to demonstrate how he could be simultaneously conservative in his views on women and break so much new ground in other areas." - John Pierson, Community Care, February 1988

"There is so much interesting material succinctly written in this book and with a great deal of reference to a wide range of sources, that it is hard to select from it. I recommend it to anyone interested in the derivations of analytic theories about women's psychology. The author traces a path through the vicissitudes of late nineteenth and twentieth century conflict and Jewish migration, through differences within Judaic culture, through the writings of several authors on Freudian psychoanalytic developments, through Freud's personal experience and through his family's relationships, affected as they were by their position as first generation immigrants in Vienna." - Jean Thomson, The Journal of Analytical Psychology

GOR002819146
The Riddle of Freud: Jewish Influences on his Theory of Female Sexuality by Estelle Roith
Estelle Roith
New Library of Psychoanalysis
Used - Very Good
Paperback
Taylor & Francis Ltd
1987-09-17
208
0415214874
9780415214872
N/A
Book picture is for illustrative purposes only, actual binding, cover or edition may vary.
This is a used book - there is no escaping the fact it has been read by someone else and it will show signs of wear and previous use. Overall we expect it to be in very good condition, but if you are not entirely satisfied please get in touch with us.