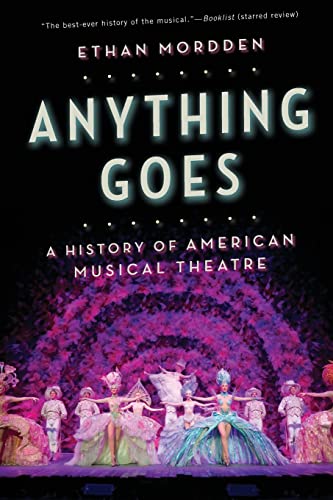 Anything Goes
by Ethan Mordden

Anything Goes: A History of American Musical Theatre by Ethan Mordden

Ethan Mordden has been hailed as "a sharp-eared listener and a discerning critic," by Opera News, which compares his books to "dinner with a knowledgeable, garrulous companion." The "preeminent historian of the American musical" (New York Times), he "brings boundless energy and enthusiasm buttressed by an arsenal of smart anecdotes" (Wall Street Journal). Now Mordden offers an entirely fresh and infectiously delightful history of American musical theatre. Anything Goes stages a grand revue of the musical from the 1920s through the 1970s, narrated in Mordden's famously witty, scholarly, and conversational style. He peers with us over Stephen Sondheim's shoulder as he composes at the piano. He places us in a bare rehearsal room as the cast of Oklahoma! changes history by psychoanalyzing the plot in the greatest of the musical's many Dream Ballets. And he gives us tickets for orchestra seats on opening night-raising the curtain on the pleasures of Victor Herbert's The Red Mill and the thrill of Porgy and Bess. Mordden examines the music, of course, but also more neglected elements. Dance was once considered as crucial as song; he follows it from the nineteenth century's zany hoofing to tap "combinations" of the 1920s, from the injection of ballet and modern dance in the 1930s and '40s to the innovations of Bob Fosse. He also explores the changing structure of musical comedy and operetta, and the evolution of the role of the star. Fred Stone, the avuncular Scarecrow in the Wizard of Oz, seldom varied his acting from part to part; but the versatile Ethel Merman turned the headlining role inside out in Gypsy, playing a character who was selfish, fierce, and destructive. From "ballad opera" to burlesque, from Fiddler on the Roof to Rent, the history and lore of the musical unfolds here in a performance worthy of a standing ovation.

[T]he book takes us to present day, Mr. Mordden has a lot of ground to cover, but his high-energy style carries us along amiably, and it soon becomes obvious that he hasn't set out to write a reference work but... a survey of an art form seen through the eyes of a breathless and opinionated host." * The Wall Street Journal *
More journalistic than academic, Anything Goes has a relaxed spryness. ("Oklahoma!" in Mordden memorable formulation, "is a musical comedy undergoing psychoanalysis.") It's the work of an expert who is also an unabashed fan, an inveterate theatergoer who can deconstruct a score and reel off sparking backstage anecdotes all in the same paragraph. * Los Angeles Times *
Mordden remains an undisputed heavyweight in his field; his output is impressively comprehensive and his enthusiasm inexhaustible. * Washington Independent Review of Books *
[O]bviously the best-ever history of the musical and likely to remain so for a very long time. Individual shows and even numbers leap to life in Mordden's colorful prose, both in the main text and the hefty bibliographical and discographical essays that propel the volume to a hilarious final bon mot." * Booklist (starred review) *
For four decades he has been entertaining and enlightening readers with mind-boggling regularity and with perspective, perspicacity, and pizzazz. Now with Anything Goes Mordden miraculously manages to stylishly convey in an indispensable single volume, the uncanny and encyclopedic breadth of his knowledge-and the complexity of this enchanted American art form. * Geoffrey Block, author of Enchanted Evenings: The Broadway Musical from "Show Boat" to Sondheim and Lloyd Webber, and Series Editor of Oxford's Broadway Legacies *
Simply the best one-volume cronicle of the art-form." * Stage Direction Magazine *
Anything Goes offers the surest description of the musical, and represents Mordden's own revised conclusions after almost forty years of considering these issues." * The Gay and Lesbian Review *

GOR011104437
Anything Goes: A History of American Musical Theatre by Ethan Mordden
Ethan Mordden
Used - Good
Paperback
Oxford University Press Inc
2015-07-09
360
0190227931
9780190227937
N/A
Book picture is for illustrative purposes only, actual binding, cover or edition may vary.
The book has been read but remains in clean condition. All pages are intact and the cover is intact. Some minor wear to the spine.