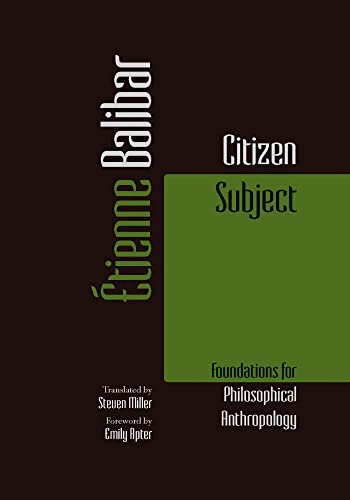 A collection of Essays over the last 20 years, exploring different dimensions (historical, political, philosophical, literary) of the philosophical debate on subjecthood and subjectivity in Modernity, as it was framed by the Controversy on the subject from the 1960's, and showing how it is now continued in a controversy on the Universal.

What can the universals of political philosophy offer to those who experience the living paradox of an inegalitarian construction of egalitarian citizenship? Citizen Subject is the summation of Etienne Balibar's career-long project to think the necessary and necessarily antagonistic relation between the categories of citizen and subject. In this magnum opus, the question of modernity is framed anew with special attention to the self-enunciation of the subject (in Descartes, Locke, Rousseau, and Derrida), the constitution of the community as we (in Hegel, Marx, and Tolstoy), and the aporia of the judgment of self and others (in Foucualt, Freud, Kelsen, and Blanchot).
After the humanist controversy that preoccupied twentieth-century philosophy, Citizen Subject proposes foundations for philosophical anthropology today, in terms of two contrary movements: the becoming-citizen of the subject and the becoming-subject of the citizen. The citizen-subject who is constituted in the claim to a right to have rights (Arendt) cannot exist without an underside that contests and defies it. He-or she, because Balibar is concerned throughout this volume with questions of sexual difference-figures not only the social relation but also the discontent or the uneasiness at the heart of this relation. The human can be instituted only if it betrays itself by upholding anthropological differences that impose normality and identity as conditions of belonging to the community.
The violence of civil bourgeois universality, Balibar argues, is greater (and less legitimate, therefore less stable) than that of theological or cosmological universality. Right is thus founded on insubordination, and emancipation derives its force from otherness.
Ultimately, Citizen Subject offers a revolutionary rewriting of the dialectic of universality and differences in the bourgeois epoch, revealing in the relationship between the common and the universal a political gap at the heart of the universal itself.

The appearance of this book in France was something of a historic event. Under the heading of 'universality,' a concept that Balibar has almost single-handedly salvaged, Citizen Subject tries to rethink political belonging in our time, so as to redeem a humanism capable of contesting itself from the inside and available to serve the struggles of our day. Balibar rewrites a central tradition of Western philosophy from Descartes through Locke, Rousseau, Hegel, Marx, and Nietzsche, and from Wolstonecraft through Fanon, showing in case after brilliant case that the very writers most invoked as origins (or critics) of the subject had in fact been engaged in a common enterprise of thinking a social, nontranscendent self, the democratic citizen under the contradictory conditions of modernity. The result is one of the strongest, most ambitious, and most pertinent rewritings of the history of philosophy that readers are likely to encounter in their lifetimes.----Bruce Robbins, Columbia University
Etienne Balibar is Professor Emeritus of Moral and Political Philosophy at Universite de Paris X-Nanterre; Distinguished Professor of Humanities at the University of California, Irvine; and Visiting Professor of French at Columbia University. His many books in English include Citizen Subject: Foundations for Philosophical Anthropology (Fordham, 2016), Violence and Civility: On the Limits of Political Philosophy (Columbia, 2016); Equaliberty: Political Essays (Duke, 2014); We, the People of Europe? Reflections on Transnational Citizenship (Princeton, 2003); Politics and the Other Scene (Verso, 2002); Masses, Classes, Ideas: Studies on Politics and Philosophy before and after Marx (Routledge, 1994), and two important co-authored books, Race, Nation, Class: Ambiguous Identities (with Immanuel Wallerstein; Verso, 1988) and Reading Capital: The Complete Edition (with Louis Althusser and others; Verso, 2016). Steven Miller is Associate Professor of English and Director of the Center for Psychoanalysis and Culture at the University at Buffalo, SUNY. He is author of War After Death: On Violence and Its Limits and translator of books by Catherine Malabou, Etienne Balibar, and Anne Dufourmantelle. Emily Apter is Silver Professor of Comparative Literature and French at New York University. She has published extensively in translation theory and is the author of Against World Literature: On the Politics of Untranslatability (Verso, 2013) and co-editor with Jacques Lezra and Michael Wood of the Dictionary of Untranslatables: A Philosophical Lexicon (Princeton University Press, 2014). Her most recent book is Unexceptional Politics: On Obstruction, Impasse and the Impolitic (Verso, 2018).
Foreword-After the Quarrel INTRODUCTION Citizen Subject Response to a Question from Jean-Luc Nancy: Who Comes After the Subject? ANNEX: Subjectus/subjectum PART ONE Our True Self Is Not Entirely Within Us 1. Ego sum, ego existo: Descartes on the Verge of Heresy 2. My Self, My Own: Variations on Locke 3. Aimances in Rousseau: Julie or The New Heloise as a Treatise on the Passions 4. From Sense Certainty to the Law of Genre: Hegel, Benveniste, Derrida PART TWO Being(s) in Common 5. Ich, das Wir, und Wir, das Ich ist: Spirit's Dictum 6. The Messianic Moment in Marx 7. Zur Sache Selbst: The Common and the Universal in Hegel's Phenomenology of Spirit 8. Men, Armies, Peoples: Tolstoy and the Subject of War 9. The Social Contract Among Commodities: Marx and the Subject of Exchange PART THREE The Right to Transgression 10. Judging Self and Others (On the Political Theory of Reflexive Individualism) 11. Private Crime, Public Madness 12. The Invention of the Superego: Freud and Kelsen 1922 13. Blanchot's Insubordination (On the Writing of the Manifesto of the 121) CONCLUSION The Uneasiness of the Subject Bourgeois Universality and Anthropological Differences
NGR9780823273614
9780823273614
082327361X
Citizen Subject: Foundations for Philosophical Anthropology by Etienne Balibar
Etienne Balibar
Commonalities
New
Paperback
Fordham University Press
20161101
416
Winner of 2013 French Voices Prize 2014 null null null null null null null null null
Book picture is for illustrative purposes only, actual binding, cover or edition may vary.
This is a new book - be the first to read this copy. With untouched pages and a perfect binding, your brand new copy is ready to be opened for the first time
Trustpilot